Waaaaarsaaaaaw. Lovely woody word, Warsaw. Almost worth a point or two by itself. It’s a shame that such an enjoyable word to say has been attached to such a downer of a game as this. Don’t get us wrong, that’s not a knock on Warsaw’s (Waaaarsaaaaw’s) quality; it’s a polished production through and through, and its component parts fit very well together to create an experience that’s undeniably impressive, if not original. But, a downer it certainly is – staggeringly difficult, and an oppressive reminder of the very real and very hopeless Warsaw Uprising of 1944.

To call this game “inspired by” Darkest Dungeon is a little like saying that a puddle is inspired by rain. At first, we assumed it was some sort of follow-up or tie-in, but no – just a big fan. Taking control of a group of resistance fighters, you’ll head into war-torn Warsaw, sneaking through the ravaged streets in search of supplies, survivors and myriad other missions. 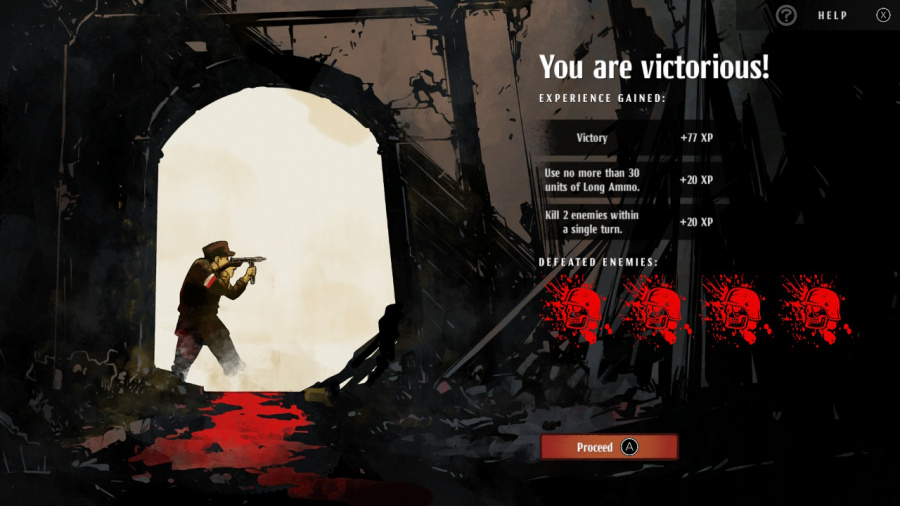 Every second of time you spend on the map counts – your “action points” tick down exponentially and running out of them results in a failed mission. You can arrest their gradual ebbing away with certain one-use items, but mostly it just pays to move quickly and carefully. Unfortunately, you’re ever-vulnerable to attack by German patrols if spotted, and combat here is something you’re going to want to avoid if possible.

Battles, you see, are a serious drain on your resources – not just in terms of ammunition or other consumables, but also the lives of your soldiers. See, Warsaw is one of those permadeath-packing titles, and if you lose a member of the resistance in battle, they’re gone forever. And that’s easy to do, because you’re almost always outnumbered and outgunned in these skirmishes. The turn-based systems are familiar but functional, with the typical selection of characters geared towards offence, defence and support. Enemy units seem to have entirely too much health, but skilful manipulation of your own ranks as well as deft choices of attack or support skills will hopefully see you to victory with as few injuries as possible. 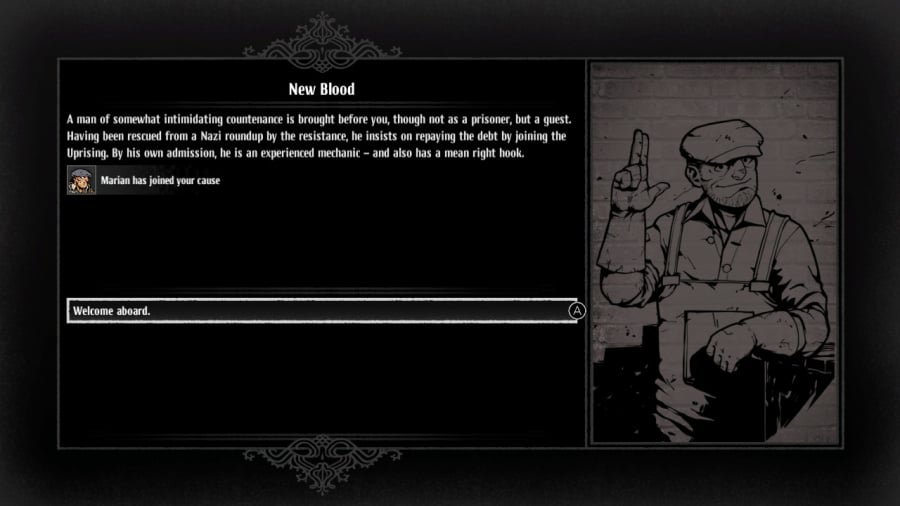 It’s nothing you haven’t seen before, but it works – fantastic character art enhances these sequences, but it really is extraordinary how reminiscent of Darkest Dungeon it really is. It’s not a comparison that flatters Warsaw, either, given that it’s comparatively quite a bit less interesting, but in the game’s defence it isn’t really the same genre. As punishing as Warsaw can be, the fact that the setting is based in reality gives it a desolation that Darkest Dungeon can’t (and doesn’t try to) reach – whether this is a good or bad thing rather depends on you. We didn’t personally find a whole lot of emotion in Warsaw, but we can see how some may find it hard going in its sheer hopelessness; no matter the outcome of the game, you can’t exactly change what really happened.

Outside of gunplay, there are also narrative moments and decisions that can occur both during and after your missions – these will usually measure your squad’s statistics against a somewhat desperate decision and (to our horror) your party members can sometimes outright die if you pick the wrong choice. This sounds unfair, but these sections are interesting, well-written and lend plenty of thematic weight to a game already rich in sombre atmosphere.

Between missions, you’ll return to your home base, which is essentially a glorified menu wherein you can tool up and recruit new resistance members for your next deadly venture into the streets. You’ll need to weigh up whether or not you need to bench your star players here, too; they’ll heal between fights during missions, but on completion they’ll return to low health, meaning you’ll need to rest them for several in-game days before they’ll be fighting fit again. Other aspects of squad management are handled here, as well – your inventory and upgrades, for example, as well as mourning those you’ve lost. Which will be a hell of a lot. 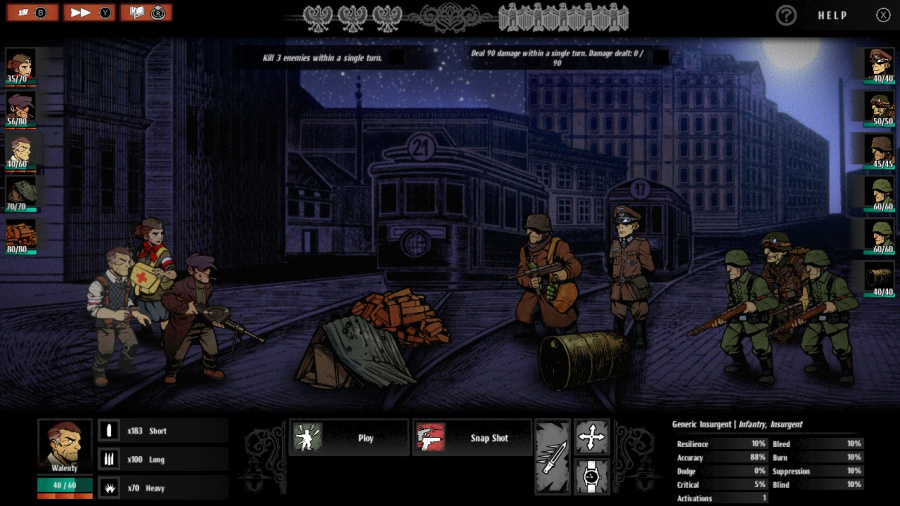 Graphically, it’s on point (though the UI text is a little too small). The art is fantastically expressive, and the maps themselves – while a little visually samey – work hard to sell the bleakness of the scenario. Paired with an impressive soundtrack, it’s an atmospheric treat. It’s just a shame it’s so damn hard. Of course, it’s hard – World War 2 isn’t known for being one of the easier wars – and if it’s driving home the hopelessness of the whole resistance, it does a good job. Still, many gamers are going to bounce off the sheer aggression and unrelenting punishment that’s at full force here, and we can’t blame them. The repeated and grinding succession of battles that some missions require can be outright – and we hate to say it – boring.

Warsaw’s a disheartening experience through and through, and normally that would be enough for a low score and some harsh words. But we think that, here, the futility is rather the point of the exercise. It’s not going to be for everyone by any means, but fans of Valiant Hearts or This War of Mine will get a kick out of its stark, unforgiving world. War is hell. Warsaw is hell. But it’s a pretty good hell, which makes it at least a seven.