Ships in the knight: an AoE2 match report

This is part 4 of Nate gets good at AoE2, a series in which Nate attempts to get really good at Age Of Empires 2, via the monstrous crucible of ranked online multiplayer.

I’ve not posted about Age Of Empires 2 in a while, because there’s been a lot of other things on, but I’m still plugging away with it – I start each day with a quick random match against the AI to keep my hand in, and once a week or so, I dare to enter the adrenaline-soaked APM hell of ranked multiplayer. I lose more than I win, but I’m slowly getting better. This match made me feel particularly good, and it had the plot of a classic farce (only with war elephants), so it seemed like a good one to relate to you. Get your Knight Vision Goggles on, then, and let’s see how it played out.

One: get the fish in

I was the Persians, in red: a cracking cavalry civ, with good economy bonuses and a big bad fight elephant as a unique unit. They were the Franks, in blue: an even better cavalry civ, with some rando axe dudes as a unique unit. We were fighting on “team islands”, but since we had no teams, it was just islands, really. Since there wasn’t going to be any early game aggression, we both zoomed towards the castle age as fast as possible, powered by tons of nutritious, boat-collected mackerel. I’m quite good at this bit of the game, so I built up a decent economic lead.

Two: readying ourselves to rumble 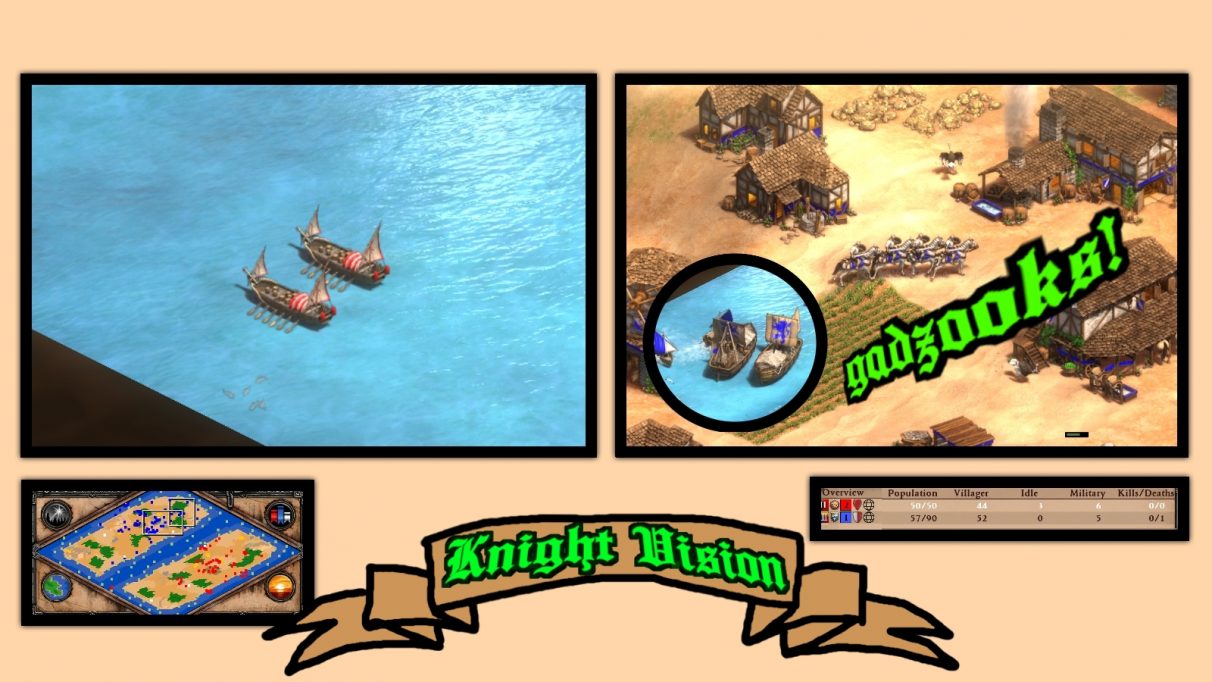 I built a small fleet of fire ships to protect against naval assaults – but I’d bet wrong, as blue was focusing entirely on preparing for a knight-heavy beach landing. Alas, because blue hadn’t wasted resources on a navy, they hit the castle age first, and started booming hard, building extra town centres and getting a huge economic lead on me. 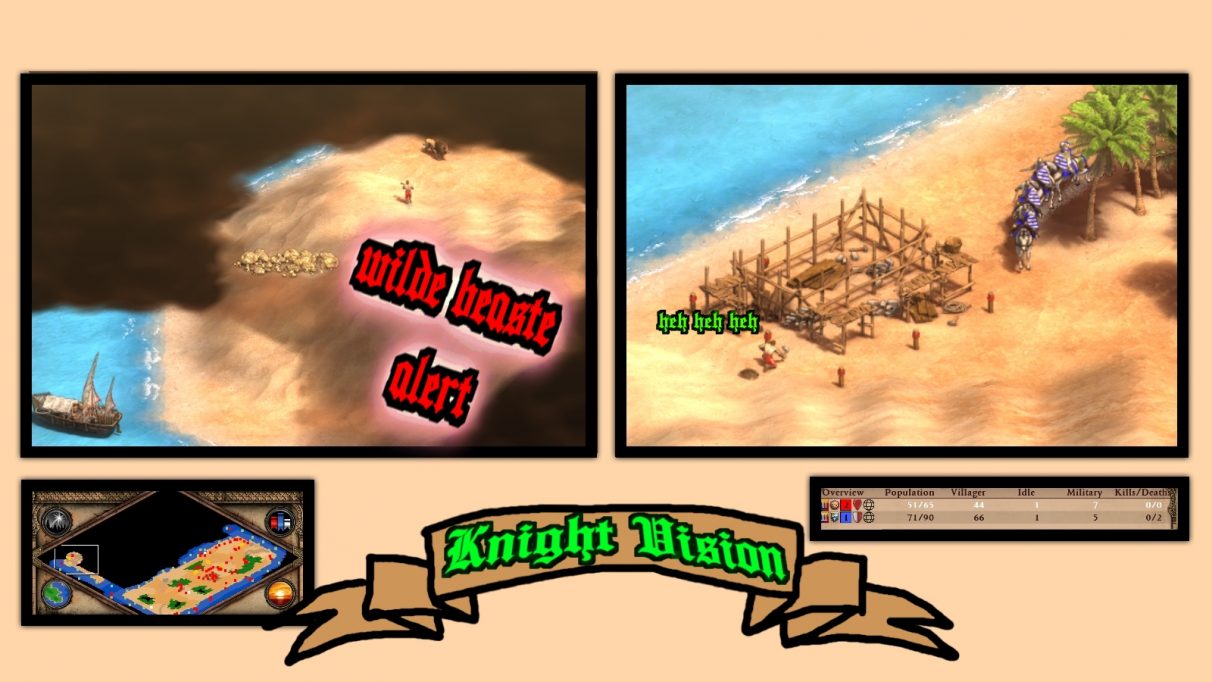 Still, when I saw blue hit castle age, I was determined to seize the initiative. Even more than other maps, team islands usually gets won by whichever player can spin the most plates at once, and keep their enemy feeling on the back foot. So I got a transport ship over to the bum end of blue’s island ASAP, with a villager intent on building military buildings. He had to fight a lion first, irritatingly. But he devastated it, and started hammering together a stable out of sand and stuff. The blue knights, still mustering for an invasion, patrolled right past him and didn’t notice! 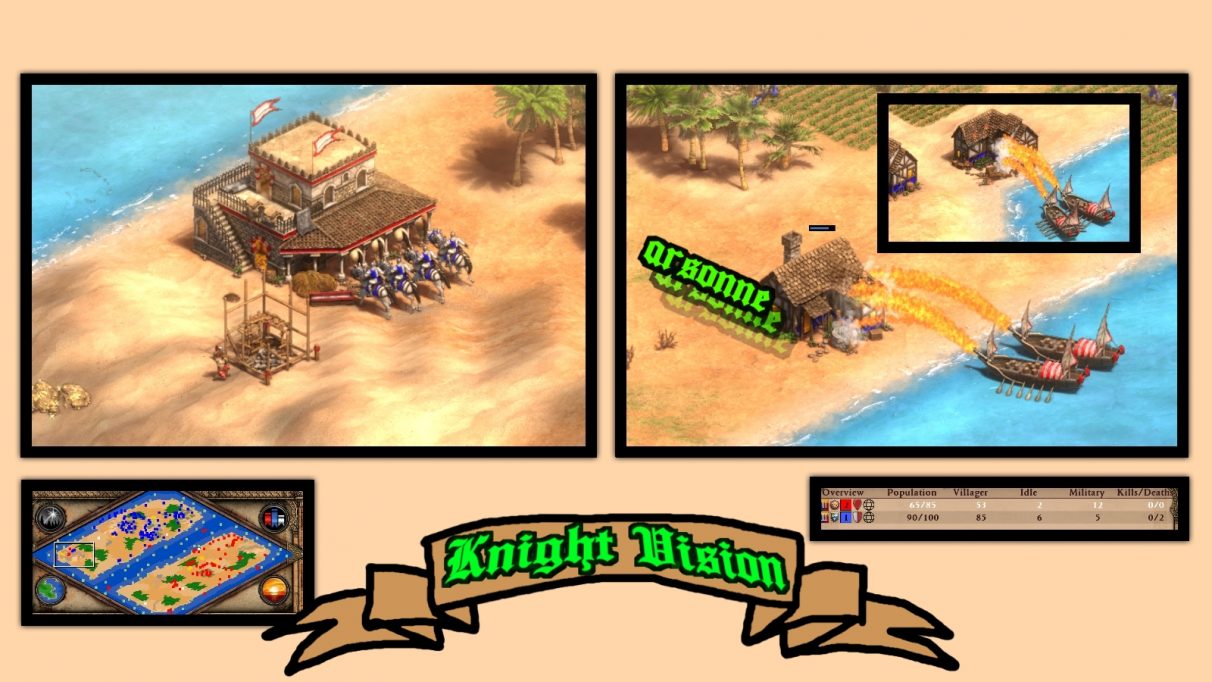 Oh no! Blue clocked my stable right as I started getting a tower up, and started knighting it to pieces. They had a massive economic lead now, with a full 25 villagers more than me, and I knew an invasion must be imminent. However: I had a navy, and blue did not. So I decided to use it to buy myself as much time as possible, splitting up my fleet and burning anything I could find within range of the coast. 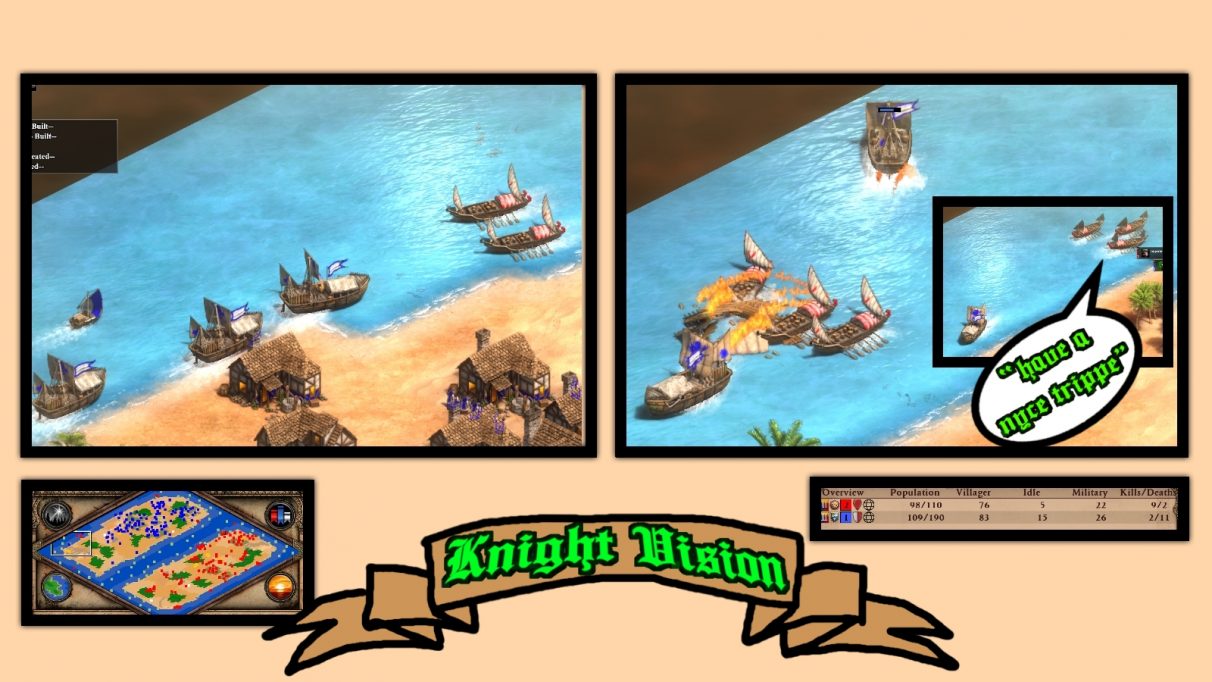 Lucky, my disruption fleet arrived on the back coast of blue’s island right as four transports rammed with angry French knights set sail for my homeland. The ships were totally unguarded, but in a disaster of timing, I was micromanaging my economy back home when my fire ships engaged! They managed to kill two of the transports on instinct, but then just happily sailed away, presumably wishing the knights bon voyage as they departed. This would prove to be a near-fatal error on my part. 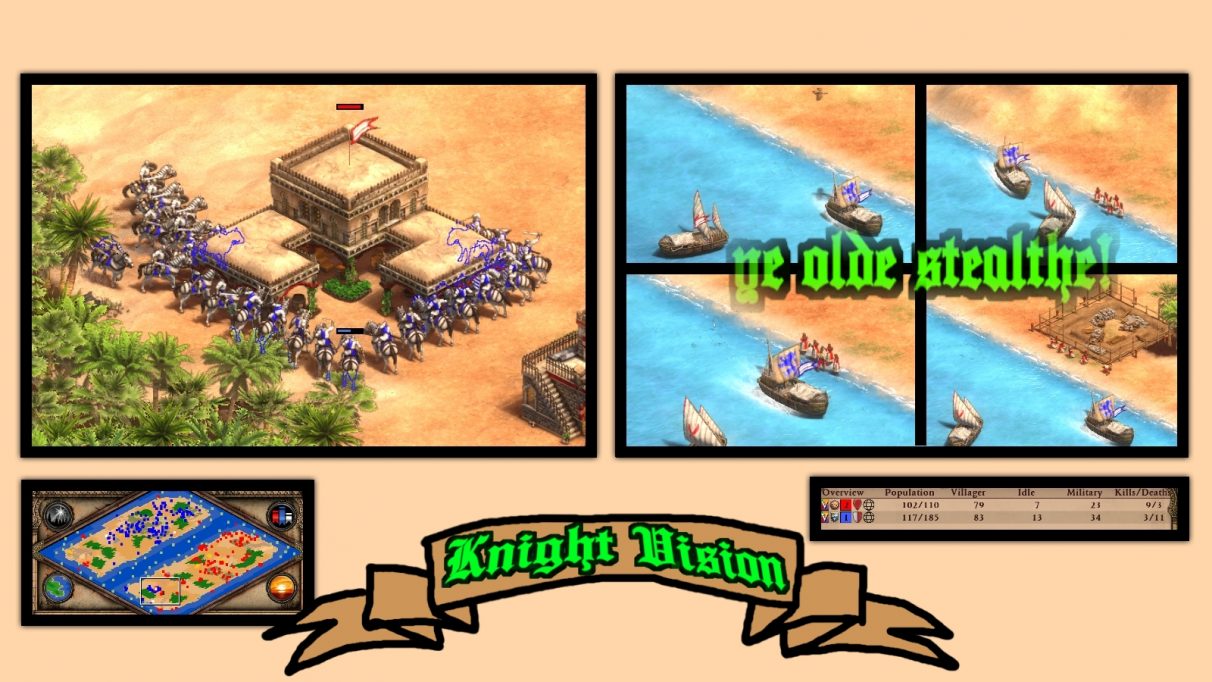 Inevitably, the invasion landed, and his knights swarmed one of my town centres like a load of big clanking wasps. I immediately started throwing up a cluster of panic barracks further inland to start churning out pikemen for the defence, but I was in danger of falling into an entirely defensive footing – if that happened, blue’s economic lead would surely spell my doom. So, figuring they’d assume I was too busy to launch a follow up to my failed invasion, I sent a boat full of villagers to start building a castle on the empty coast of blue’s island. They landed successfully, and blue’s second invasion fleet sailed right past them, ship after ship after ship, without noticing! 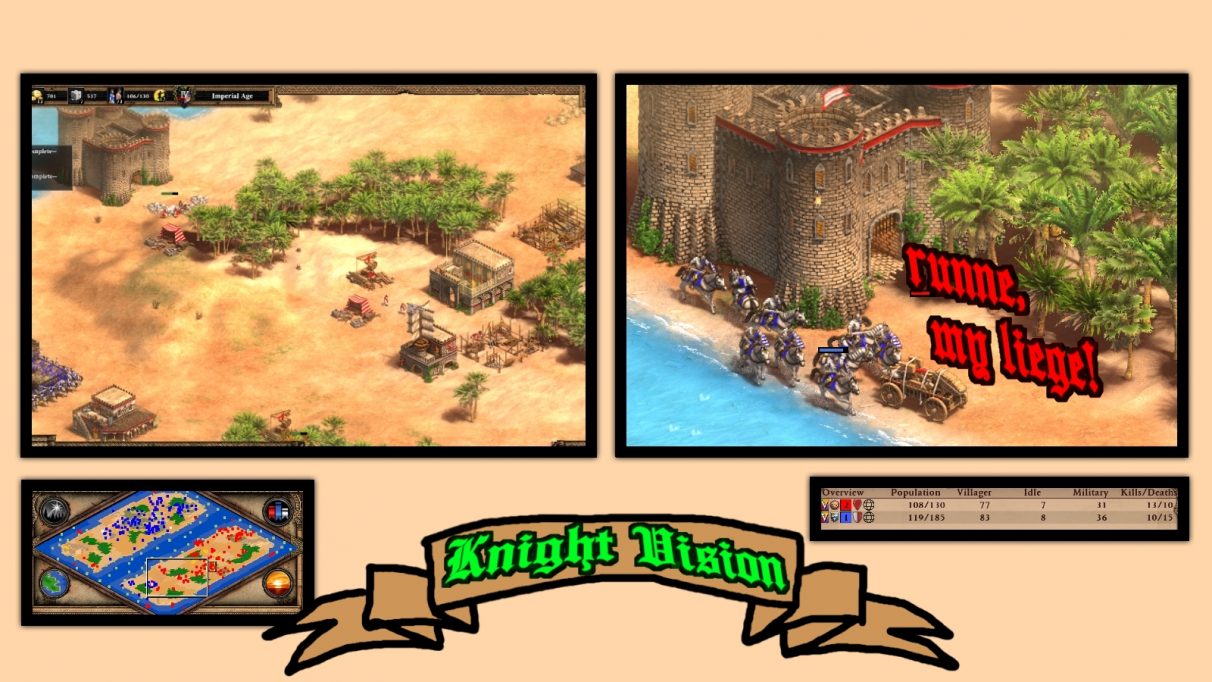 Luckily, it was taking blue some time to chew through my secondary town centre back home, giving me time to start assembling the pointy boi swarm and a defensive castle. But I still needed to buy precious minutes. So as soon as the castle went up on their island, I built a trebuchet – a dreaded destroyer of castles, which can launch a 95kg stone projectile more than 300 metres – to freak blue out. It worked! All the knights headed to reinforce the blue invasion turned tail to repel the rock-hurler, and loads of them died to arrow fire in the attempt. Now I had them rattled.

Eight: The best attack is a good defence… while u also attack. And defend. 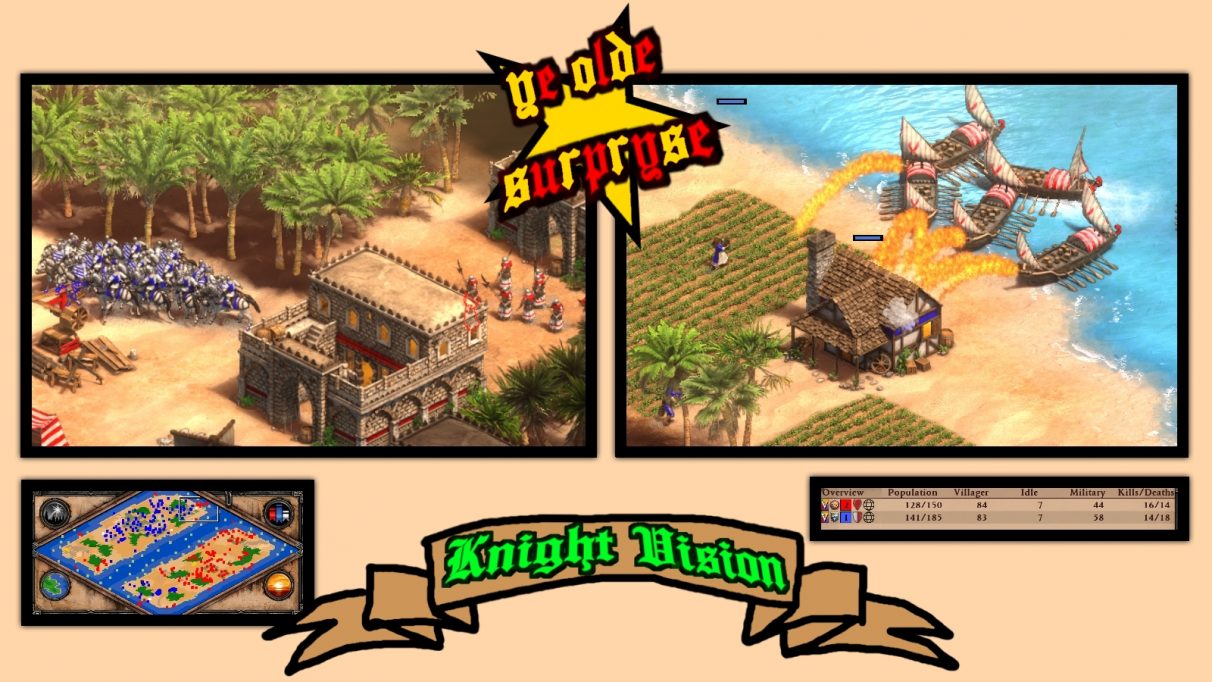 Eventually blue made their push on my main centre. But they were too late: I lured them in with a handful of weak units, before catching them in the range of my surprise defensive castle, and unleashing a swarm of newly-upgraded halberdiers on them. But despite my efforts, blue still had more resources than me, and my only hope lay in keeping them too busy with chaos around the map to focus their efforts on wiping out my heartland. So out came the fire ships again, who had been hiding in a corner of the map so blue would forget about them, to do a bunch more burning. 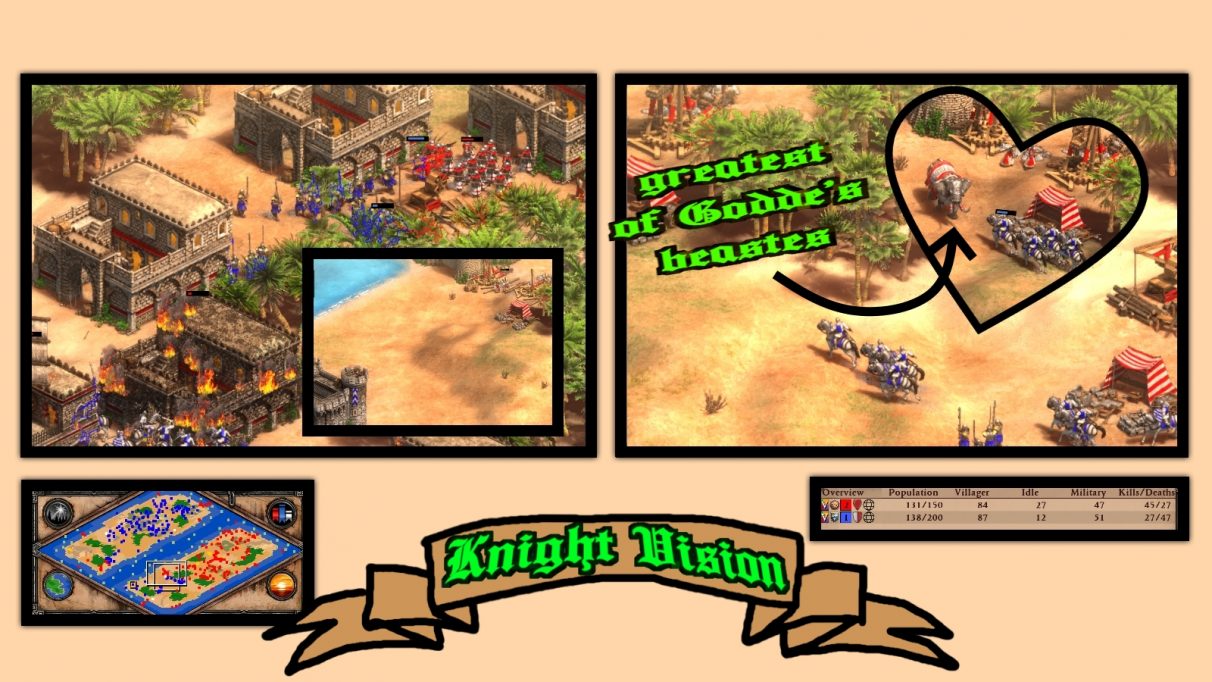 The mayhem continued to escalate, on three fronts now: the sea, where blue was having to panic-build a navy to repel the fire ships, the enemy island, where I was slowly but surely building a city, and my home island, where my defences were coming under ever-more-intense siege from blue. My strategy was just to keep springing new surprises on each front in rotation, in the hope I could concentrate on more things at once than my foe could. Two trebuchets on the home front lured blue into premature assault, resulting in my pikemen luring a load of swordsmen into another castle-based massacre. The survivors went for the siege engines, but then had an elephant – which had been hiding in the castle behind the trebs – dumped on them when they least expected it.

Ten: the menagerie of war. 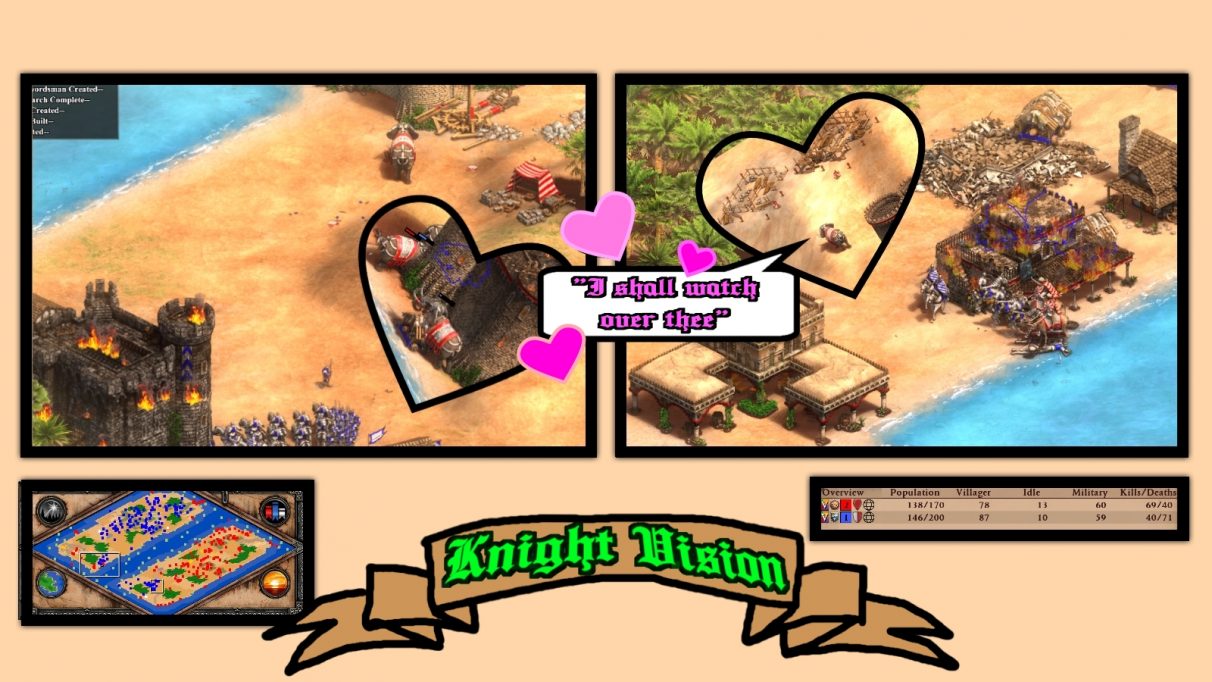 I had distracted blue for long enough that my economy was finally catching up with theirs, and with the new influx of food and gold, I decided to pivot hard to large quadrupeds. As well as holding up the defence back home (for blue had not yet had time to adapt their force composition to counter my big grey gentlemen) my elephants began to mass on the enemy island as well. One noble pachyderm guarded a lone villager as they started constructing a row of stables behind my expeditionary base… which blue knew nothing about, as they were too focused on the castle sieges going on across both islands. Both of us had, admittedly, entirely forgotten about the naval war by now.

Eleven: my humps, my humps. 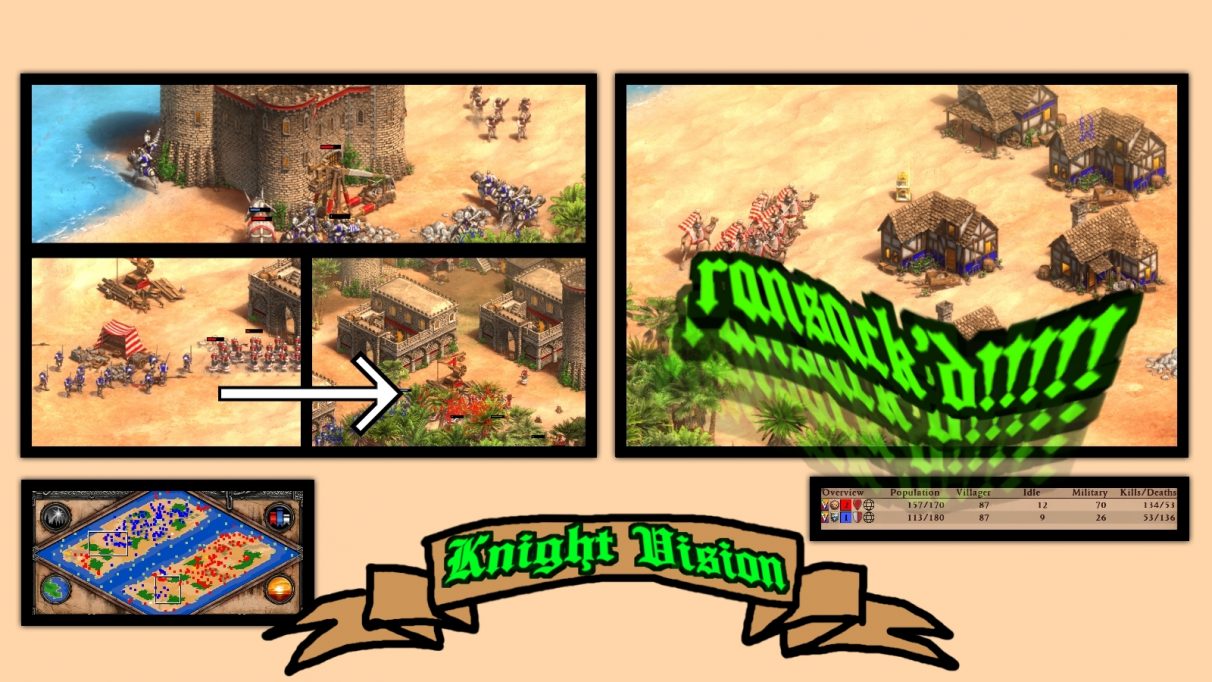 Just as blue was finally on the verge of knocking down my defensive castle, winning unchallenged access to the heart of my tenuously expanded economy, two things happened. First, I pulled yet another luring run with my pikemen, to draw away just enough enemy swordsmen to give my elephants a fighting chance to defend the castle. And second, the stables I had recently started building on the enemy island began churning out camels. Camels with knives. As the first squadron of the lumpy ungulates came honking and spitting their way into the centre of blue’s farming country, they decided they’d had enough, and suddenly resigned. Victory was mine!

Still, it was a damned close call. By the time blue resigned, I had only just caught up to them in terms of villager count, and I had way more idle workers. Given time, they would certainly have overwhelmed me still – but even though I spent the whole game technically losing, it never felt that way to blue. And so my ELO rating climbed back towards 900 (which admittedly is still on the upper end of “completely shit”), and I learned an important lesson about the importance of retaining the initiative.