Yesterday, AMD gave us our first glimpse of what their upcoming RX 6000 Big Navi graphics cards will be able achieve at 4K. While the bulk of their Zen 3 event was centred around their Ryzen 5000 CPUs, we also got a first look at their first Big Navi GPU in action, running Borderlands 3 on its top Badass quality settings at an average of 61fps. AMD also shared some figures for Gears 5 and Call Of Duty: Modern Warfare, but how do these benchmark figures actually stack up against Nvidia’s new RTX 3080? Let’s find out.

These are the figures AMD provided during their livestream event yesterday, and at first glance it all looks pretty impressive. While Gears 5 and Borderlands 3 aren’t the most demanding games on the planet, it’s good to see AMD’s first Big Navi card will be able to run them at 60fps+ on max settings at 4K. With these kinds of numbers, it would imply that the AMD’s first RX 6000 card will be a proper RTX 3080 competitor, which as we saw in my review is also capable of producing speeds of at least 60fps on max settings at 4K, too.

The Asus TUF Gaming OC edition of the RTX 3080 I used for my review has since been whisked away for testing elsewhere, but fortunately I’ve been able to replace it with MSI’s Gaming Trio X edition, which is even more enormous (and requires three – yes three! – 8-pin power connectors) than its Asus counterpart. A full review of the MSI will be coming shortly, but so far all my benchmarking figures suggest it’s a teensy bit faster than the Asus TUF, albeit only by a couple of frames in most cases.

Still, MSI’s Gaming Trio X is certainly one of the beefier, not to mention more expensive, RTX 3080 cards out there at the moment, so that’s worth bearing in mind when analysing our benchmark figures. As for the rest of my test PC, I ran it with an Intel Core i5-10600K, 16GB of RAM, NVMe SSD storage and a 750W power supply. AMD’s figures, on the other hand, were achieved using one of their new Ryzen 9 5900X CPUs, but they didn’t specify any other details of their PC build.

However, it looks as though AMD’s first RX 6000 GPU isn’t quite an RTX 3080 killer just yet, as you can see from my benchmark results below: 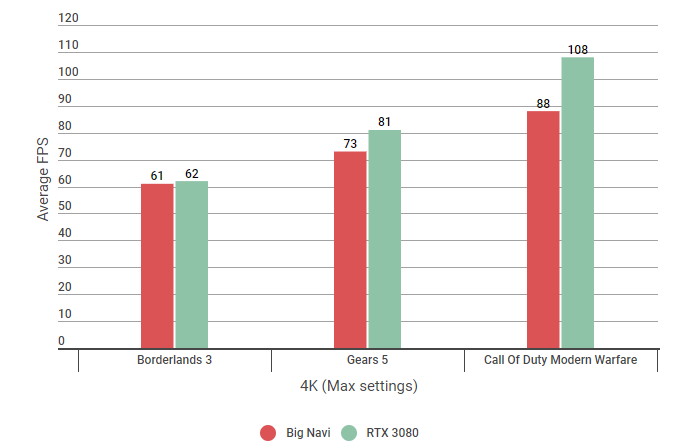 While Big Navi’s Borderlands 3 result is practically within spitting distance of the RTX 3080 (it was technically 61.92fps, according to the game’s built-in benchmark result), the gap starts to widen quite a bit when you move on to Gears 5. Here, the RTX 3080 enjoys an almost 10fps lead on its AMD rival, which is ironic considering Gears 5 is a game that’s been made to favour AMD hardware.

As for Call Of Duty: Modern Warfare, this doesn’t have a built-in benchmark like Gears and Borderlands, so it’s a little harder to get a proper, direct comparison. We don’t know what conditions AMD used to get their 88fps average. It could have been any level within the campaign, or taken from its multiplayer component for all I know. For my RTX 3080, I used the opening of the Embedded level, which involves a calm, but highly detailed stroll through a war-torn village. I noted down the minimum and maximum frame rates I saw during the opening of the above ground section of this level (in this case 90-126fps) and then took an average. I should note, this was without its DirectX ray tracing enabled.

When I re-ran with ray tracing enabled, the frame rate see-sawed between 35-107fps, resulting in a very rough average of 71fps. Again, we don’t know if AMD’s figures include ray tracing or not, making it a much harder one to judge than Gears or Borderlands 3. 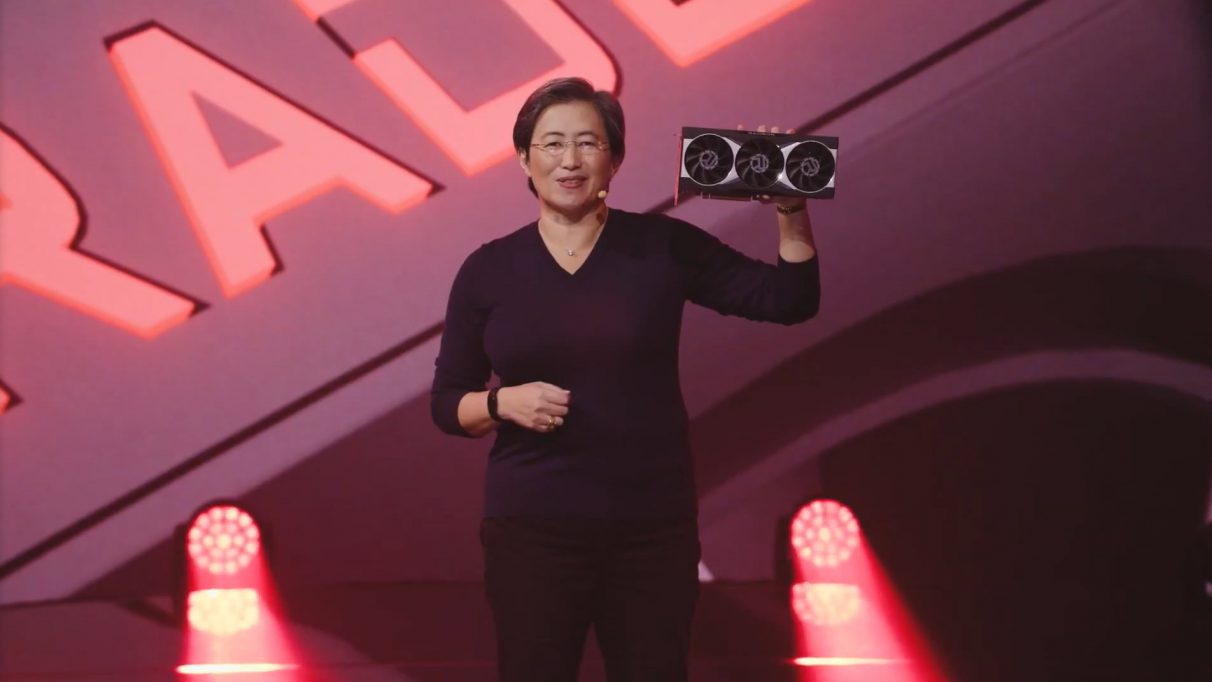 Still, at the moment, it would appear the RTX 3080 still has the upper hand over AMD’s first Big Navi GPU – although again, we currently have no idea just where this Big Navi GPU is going to sit in AMD’s overall RX 6000 family. While one would assume this initial GPU will be AMD’s flagship graphics card, there’s every chance they’ve also got a super specialist RTX 3090-style competitor waiting in the wings, for example, or they might even be going in bottom-up, so to speak, unveiling their entry-level Big Navi GPU first and then following up with the more powerful ones later. We just don’t know – and we won’t find out for sure until October 28th.

Even if this first Big Navi card isn’t quite as powerful as the RTX 3080 overall, though, the key thing will be whether AMD can beat Nvidia on price. If they can offer similar-ish speeds for a good chunk less, then they’re onto a winner – especially if they manage to keep their RX 6000 stock levels under control at launch and people are actually able to buy them beyond the first 15 minutes of them going on sale, unlike the still-sold out RTX 3080. If it ends up being another Radeon 7-style disaster show, though (which was slower than the RTX 2080 but not quite cheap enough to justify the step down in performance), then it could go south pretty fast.

Normally, I’d be pretty optimistic on this front, but given the higher-than-expected prices of AMD’s Ryzen 5000 CPUs, I’m not so sure the cost of these Big Navi cards is going to turn out particularly favourably. Again, the proof will be in the benchmark pudding, but needless to say, I will be crossing all fingers and toes for a good old-fashioned AMD and Nvidia showdown come the end of October.