There’s certainly no shortage of turn-based RPGs available on Switch these days and an even greater number of retro-pixel indie efforts that present their strategic adventures in an increasingly overused 8 or 16-Bit graphical style. Honestly, we love them really but it can definitely feel a little wearisome at times prepping yourself to dive into yet another one of these oh-so-cute SNES-esque escapades. Happy Ray Games’ Ikenfell is a further addition to the console’s library that slots squarely into this style and it really is a testament to the quality of the writing and combat on offer here that, despite our slight reluctance, ten minutes into this one we were pretty much hooked. It may look like just another cutesy RPG adventure but in reality what’s here is a complex little tale that takes some surprisingly emotional turns and is bolstered by turn-based combat that eases you in before presenting you with a proper challenge to dig into. 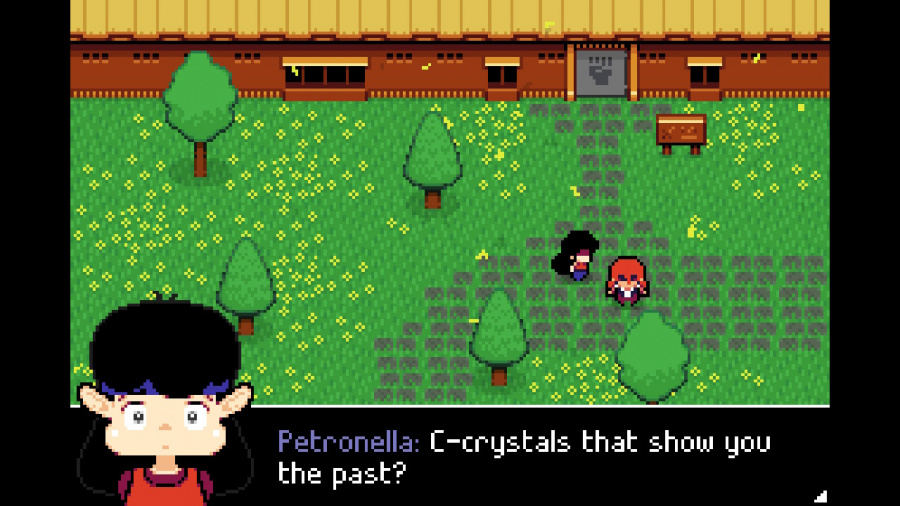 Ikenfell tells the story of Magritte, an “ordinary” who sets out in search of her sister Safina, a talented and popular witch who has gone AWOL from the Hogwarts-esque Ikenfell School of Magic which she attends. Ikenfell has been placed into emergency lockdown — something we can certainly all identify with right now — as strange happenings and magical calamities take over the campus and, as Magritte approaches, she is challenged by the school’s guardians, in the process revealing that she too possesses the ability to wield powerful magic. What ensues is a heartfelt tale in which Magritte gets to know more about herself, her sister and the true nature of the strange world in which they exist through the friends, enemies and acquaintances Safina has left behind.

Right from the opening moments here, Magritte’s adventure really does grab you, it’s filled with a real sense of wonder, of hidden magical possibilities, and is populated by a diverse cast of well-written characters, many of whom are gay, trans or struggling with their own sense of self-worth, identity or place in the world in some way or other — and all of this is further complimented by a neat combat system that keeps the many enemy encounters you’ll battle your way through feeling remarkably fresh and tactical for the story’s duration.

Turn-based battles here take place within a grid system and begin by allowing you — and another two characters who’ll eventually join your party — to position yourself within a highlighted area before choosing which attack or item you wish to use. As you progress and rank up you’ll unlock new magical abilities and spells, each of which has a different Area of Effect which is highlighted on the grid when you select them and must be taken into account as you’re deciding where to place your character before you strike. Things start off simply enough here and you’ll spend the opening hour or so of this 10+ hour adventure getting to grips with just positioning Magritte in order for her attacks to land squarely on the heads of her enemies. Your default fire attack, for example, can only affect a foe that’s within two grid spaces directly in front of you and its AoE is just one square whereas the second spell you learn affects a cross-shaped area and can damage numerous nasties who happen to linger within its range. 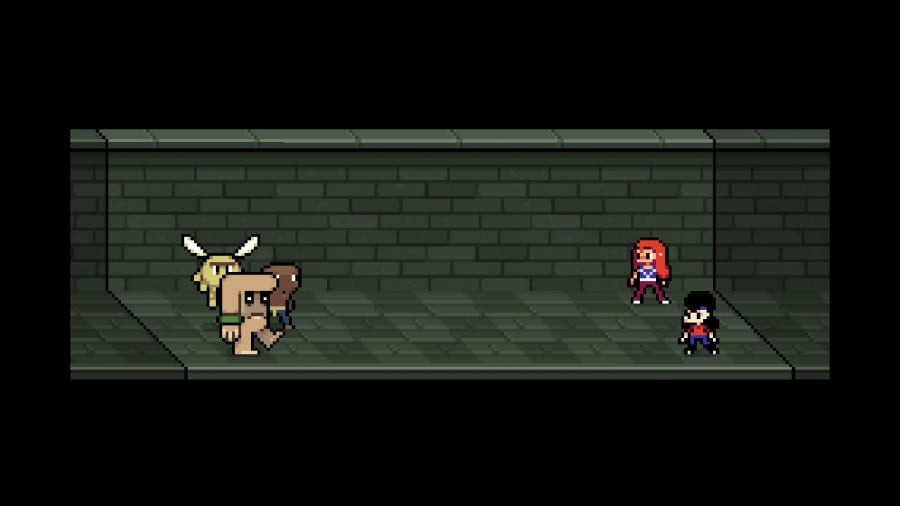 It’s a neat system and moving around the designated battle area, positioning your characters in order to get as much damage in against a group of enemies as possible in a single turn becomes more complex and satisfying as the game ups the ante and introduces foes who play dirty, summoning minions who lock down large areas of the grid, lay invisible traps or cast spells which affect your ability to move around freely. Ikenfell then adds a Paper Mario-style timing element to all of this which requires you to hit a button at exactly the right moment as you attack or defend in order to maximise the damage you dish out or minimise that which you take from an enemy onslaught. Perfectly time an attack and you’ll be greeted with a little action bubble exclaiming “great!”, mess it up and you’ll earn yourself an “oops!”. It’s a simple little wrinkle but one that, alongside the constant need to observe and take into account you and your enemy’s positions on the battlefield, gives the whole thing a much-needed layer of strategy.

There really is quite a lot to the battling here. You’ll need to beware of friendly fire, especially when laying down environmental traps of your own and enemies always have some new element to their attacks which needs to be taken into account. You may find yourself up against a group of foes who work in unison, for example, one assuming the role of assailant while the other two provide regens of health and armour, requiring you to deal with them in a certain order to succeed. Others, such as the very first boss battle you encounter, can’t be damaged in an meaningful way directly and so you’ll need to attack their exploding minions at just the right time to ensure the ensuing blast hits them. 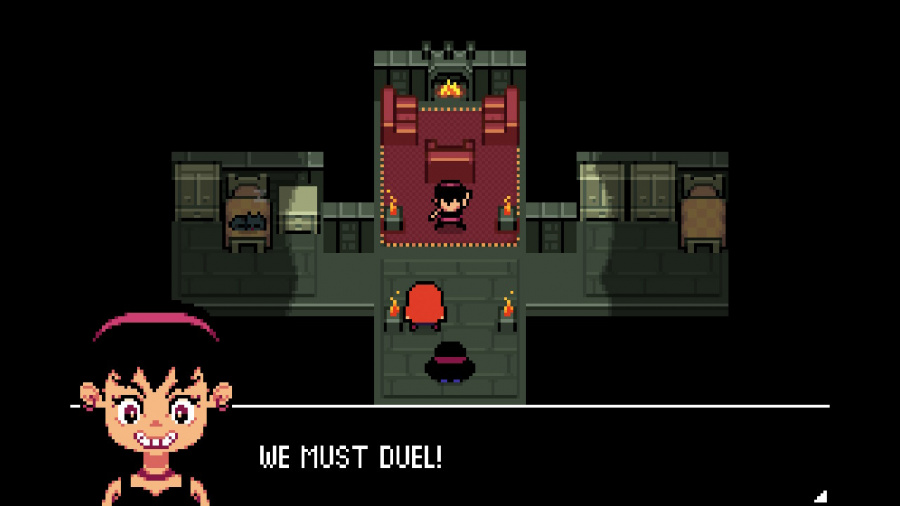 All of this is further enhanced by an impressive range of enemy types, each of whom has their own unique attack patterns and spells to get a handle on, meaning that things never really slide into monotony, no matter how many of the mostly avoidable encounters you decide to involve yourself in as you investigate the grounds of Ikenfell. This admirable variety in enemies does, however, also mean that you’re constantly introduced to brand new attacks and this can become a little frustrating at times as each one has their own bespoke little animation which affects hit timings and means you’ll likely find yourself getting bashed pretty hard before you nail when exactly to hit that button and block most of the incoming damage. It’s not a huge deal, and we’d certainly take the bonus of having so much variety over the negative of having to restart a battle every now and again, but it can be disappointing to find yourself K.O.’d just because you couldn’t possibly have known an attack’s timings beforehand.

Luckily, for those who are finding the combat tough or tedious or maybe just want to keep marching along through the story rather than spending a lot of time battling, Ikenfell also allows you play through its adventure with an Instant Win option activated, meaning you can drop down into a battle and immediately select to triumph over your adversary without any shots fired, you’ll even earn a little XP and keep levelling up your party in the process. If this feels like too much of a helping hand, Happy Ray Games has also provided the option to switch the timing mechanic between manual, semi-auto and full auto modes, meaning there’s really a level of difficulty and challenge to suit any player here. 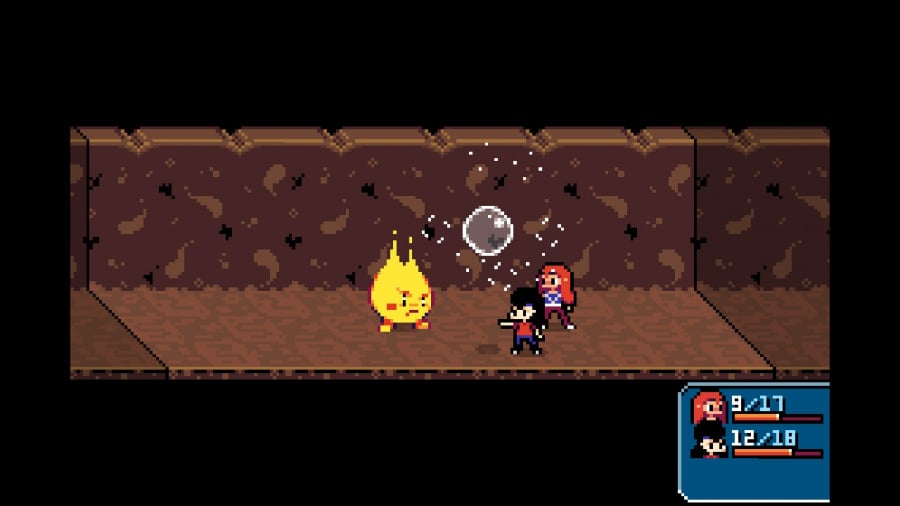 It’s an impressively versatile system, we thoroughly enjoyed battling through all of the encounters here, some of which can be genuinely tough — especially the handful of boss fights you’ll come up against in later stages — but we can totally see how some may prefer to just keep progressing along through the game’s captivating narrative and tricksy puzzle sequences rather than spend hours mixing it up with enemies. We should also give a shoutout to the game’s superb soundtrack, the work of Aivi and Surassha — a duo best known for providing the music for Steven Universe — who have delivered a majestic seventy five track effort here, including some sublime acoustic efforts that perfectly underscore some of the more emotional moments in Magritte’s journey of self-discovery.

Performance on Switch, as expected from a game in this retro pixel style, is perfect in both docked and handheld modes and, overall, this one’s a charming little adventure with a story that hooks you in quickly, keeps you interested right the way through, and is complimented by a fun battle system with plenty of accessibility options to suit all levels of player.

Ikenfell is a charming little turn-based tactical RPG that hooks you in quickly with a well-written story and strong cast of characters and keeps you locked in for its duration with a surprisingly complex combat system. There are accessibility options here to suit all levels of player, a good idea considering how tough some of the battles can be along the way, and, overall, this is a heart-warming and unique entry to its genre that comes highly recommended.