While Destiny 2 welcomed a whole lot of new players when it went free-to-play last October, it didn’t do much more than open the door and gesture broadly in the direction of a 100-person party raging across every room of the house. New players are dropped in at the deep end, and it’s not fun. So it’s good to hear more of Bungie’s plans for a friendlier new player experience in the zone where Destiny began, the Cosmodrome.

Bungie have (mostly) good news for veteran players too, revealing plans to overhaul armour mod slots to be less of a faffy mess.

With the Beyond Light expansion now barely a month away, launching November 10th, Bungie detailed more of its changes in their latest This Week At Bungie post last night.

Destiny 2’s new player experience is awful right now. After a short mission with little explanation, you’re dropped into the main social hub with little clue who you are, who anyone else is, or what’s happened. It certainly does not help that the campaign (which is soon to be removed anyway, along with a lot of the game) is hidden on an NPC in a rarely-visited corner. As for how loot and item systems work, sheesh, good luck figuring that out. The game may be free, but it’s not friendly. As much as I adore Destiny, I’d hesitate to recommend it to newcomers.

Bungie will try to address this by extending the amount of time we spend in the Cosmodrome, rather than sending us to the tower after a few minutes. New players will bump into a Hunter named Shaw Han (pictured ↑ at the top), and he’ll go through some of the basics.

“As a new player, you’ll spend your first few missions getting acquainted with the state of the world in Destiny 2,” Bungie say. “You’ll have opportunity to take a few weapons out for a spin, find engrams to try different armour and see our progression systems, and have some time to learn how to navigate the user interface to understand quests, bounties, collections, and more. All of this will happen before you set foot in the Tower, and our hope is that this refreshed New Light experience will give a much warmer welcome to Guardians as they play Destiny 2 for the first time.”

While only a small chunk of the Cosmodrome is in the current quest, Bungie are opening up a whole lot more of the zone from D1 as they bring it out of the Destiny Content Vault. Everyone will be able to run around it like a regular patrol zone, its Strike missions are coming, and we’ll get to do the new starter experience if we want to.

We’ll also get another change that’s been needed for a year: a simplification of armour mod slots under the Armor 2.0 system. All weapon-related armour mods will lose their elemental affinity, letting us use them on any armour. No more “I need Void gloves for Handcannon Loader, but that means I can’t use Shotgun Loader too because it’s Arc.” Bungie are doing away with Enhanced weapon mods too, instead making the base versions as good as Enhanceds then making them cost a bit more (but still less than Enhanceds do). Seeing as non-Enhanced weapon mods are barely worth using, yep, that’s good.

Seasonal mods will become way less faffy too. All our current armour will replace the Seasonal mod slot with a “unified Legacy mod socket that can socket all Charged with Light mods, all Warmind Cell mods, all Nightmare Hunt mods, all Garden Of Salvation mods, and all Last Wish mods.” Looking forward, armour we earn after Beyond Light launches will come with a “Combat style mod socket” which can accept all Charged With Light and Warmind Cell mods. Exotic armour we already own will get this Combat slot too, which is lovely – it has sucked that Exotics can’t use these powerful abilities.

These changes together will remove a lot of faff from setting up builds and let me optimally use more weapon combos (not to mention reducing the amount of armour I’m stockpiling), so I’m well up for all this.

Another big mod change is more controversial: Bungie are going after the anti-Taken, anti-Hive, and anti-Fallen mods we can earn from raids. The anti-Hive and anti-Fallen will be outright removed, and anti-Taken mods will only work inside the Last Wish raid. This kinda sucks because they’re powerful mods, but I’m also well up for this change because they are so powerful. The Armaments mods have been wrecking Gambit modes for ages, letting players easily juice up on Heavy ammo – which fuels relentless murderous invasions. And the Barrier mods are a must-have for any tough PvE with the right type of enemies, hugely benefiting the players with enough raid completions and good RNG to get them. 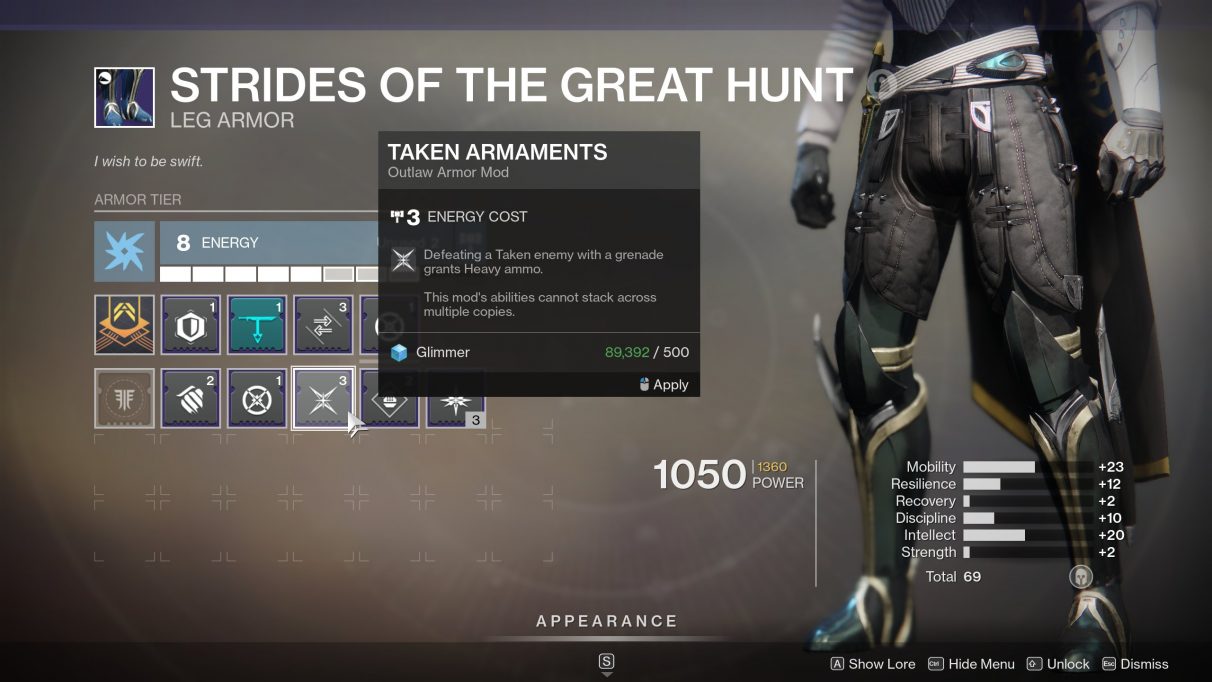 “Because these are useful with any instance of a combatant race, activity designers and sandbox designers were constantly having to be aware of how these mods would impact the play of those activities,” Bungie say. “They have proven to be problematic in Gambit (creating a clear divide between the Haves and the Have-Nots) and have significantly reduced the challenge of dungeons.”

Looking ahead, Bungie note “We’ve had a positive response to the more mechanic-focused mods from Garden of Salvation, and future raids will have mods more like those.”

New drops of Last Wish and Garden Of Salvation armour from Beyond Light onwards will have a special fifth mod slot for their own raid mods too, which is welcome – but sadly any raid armour we own going into Beyond Light won’t be upgraded with this.

As with all Destiny theorycrafting (including Beyond Light’s newly-announced Exotics), I’ll want to see how all the mod changes work in reality before I get too excited. But I’m up for it in theory. Even if my main goal before Beyond Light launches is now to score flawless solo Prophecy, Shattered Throne, and Pit Of Heresy dungeon completions before Bungie remove the Taken and Hive mods that make them so much easier.