Nivalis, the futuristic metropolis in which the events of Cloudpunk take place, really is the heart and soul of Ion Lands’ captivating “neon noir” adventure game. A wonderfully evocative voxel art city, it immediately transports us to a future that so precisely recalls the neon-drenched storefronts, rain-soaked streets and seedy underbelly of the dystopian vision of Los Angeles we all know and love from Blade Runner. This is a world where flying cars, known here as HOVAs, zoom around in an impossibly dangerous mess of light and metal, where the clouds above the city boil and rage, enormous billboards sell desperate denizens unattainable dreams and monolithic skyscrapers stretch off in every direction.

More than any other title we’ve played in recent memory, Cloudpunk relies on its setting, on the graphical wizardry of its artists and the intricately woven atmosphere they’ve created in order to sell its story, and so it’s really a rather huge problem that this Switch port of the game — outsourced here to Merge Games, who have also handled the reportedly problematic PS4 and Xbox versions — struggles on almost every level to deliver the wonder of Nivalis intact to Nintendo’s hybrid console. This port is, in short, a bit of a mess. 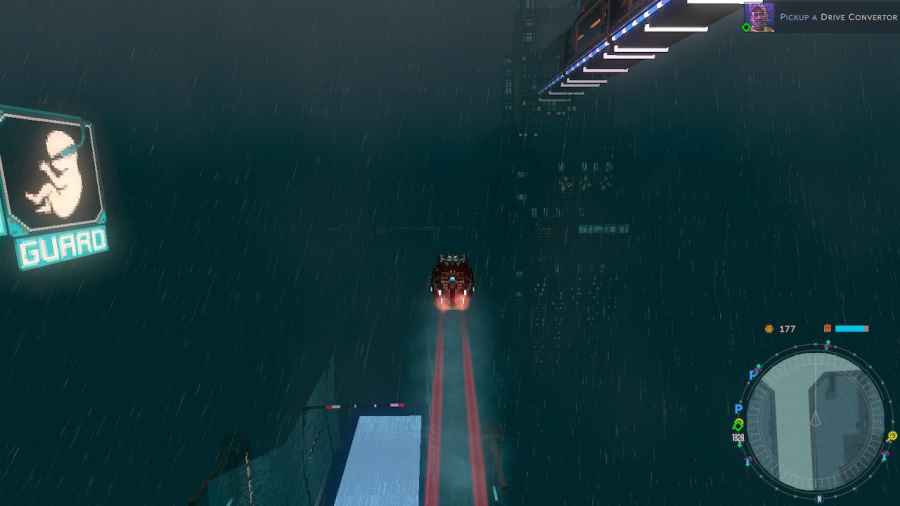 Cloudpunk’s story, which takes place across one long night in the city, sees you assume the role of Rania, a newcomer to these mean streets who’s taken a position with the semi-legal Cloudpunk delivery service. Picking up jobs that see her ferry all manner of goods and passengers across the neon cityscape with direction provided by the rather shady Control, “never miss a delivery, never ask what’s in the package”, it’s an intriguing tale that’s well told through a handful of likeable characters and sees our protagonist slowly revealing shady truths about her employer and the tensions and rivalries that grip the streets below.

Zipping around in your HOVA, zooming down neon corridors that feel alive with futuristic traffic and up and out across the foreboding night sky is a delightful experience in the PC version of this game, it’s never less that hugely atmospheric stuff and it’s added to immensely by the fact you can emerge from your hover car, slowly throttling down to street level and jumping out to explore various sketchy neighbourhoods on foot. This element of the game has also recently been added to by an excellent update, introducing a slick first person perspective which does a fantastic job of immersing you entirely in your surroundings. Making your way around here, through streets filled with cyborgs and humans, dealers, thugs and desperados, you’ll witness noisy police car chases zip by overhead as every storefront, billboard and light is reflected beautifully in the rain-soaked pavements beneath your feet. It makes every pick-up and drop-off a delight. The gameplay here may be rather simple stuff — a succession of straightforward delivery scenarios with the occasional moral choice to be made — but the evocative nature of Nivalis holds it all together. This is a city we want to explore, darting around in our HOVA, soaking in the atmosphere and just existing for a period of time in this wonderful little world. 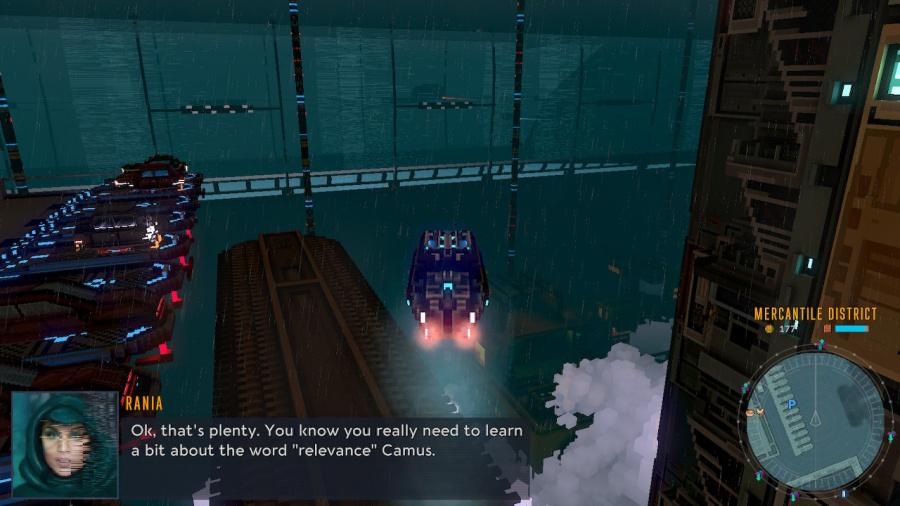 And so it is a real shame that the Switch version of Cloudpunk sees so much of this immaculately crafted atmosphere disappear in a port that really struggles on a technical level. There are no reflections in the rain here, streets which were once so hugely evocative have been drained of much of their voxel beauty and atmosphere. The game’s draw-distance has been curtailed massively, meaning those gloriously foreboding skyscrapers and billboards that provide much of the game’s futuristic backdrop as you zoom around have all but disappeared until you’re pushed right up against them. You’ll spend most of your time here speeding around enveloped by a miserable grey fog with buildings, streets and great big neon hoardings popping jarringly into view as you draw near. It’s hugely disappointing stuff.

There’s a ton of jaggy edges on every surface, the gorgeous volumetric effects that gave Nivalis so much of its glowing sense of self seem entirely absent and the framerate still can’t deal with the action, even in this compromised state. Cloudpunk on Switch often dips right down below 20fps, stuttering massively as you enter new areas — an action you’re repeatedly forced into that now regularly incurs thirty-to-forty second load times — and never manages to be in any way reliable at any point as you go about your business. Traffic levels seem to have been culled as well, we found ourselves traveling alone down barren stretches of road with rarely a sign of the topsy turvy mess of future cars zooming in and around, above and below each other that we remember from our time with the PC version of this game. 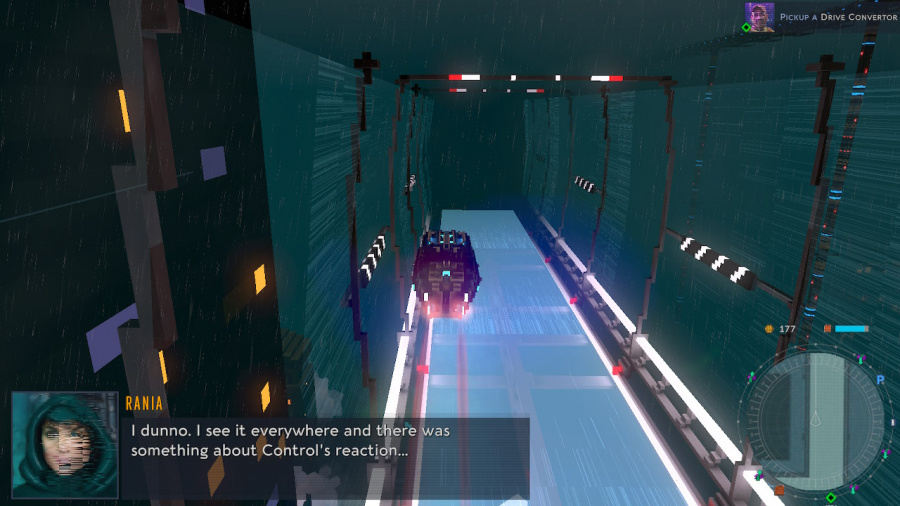 The UI, especially in handheld mode, is a rather blurred experience with points on the map and the numeric indicators that show how far it is to your next objective now almost entirely unreadable. It’s not quite so bad in docked mode but this is also where the graphical layers that have been stripped away in order to get the game up and running — the rough edges, pixellation and empty grey fog that replace so much of the once wondrous backdrop here — are laid entirely bare. Cloudpunk on Switch is a far cry from the delightful original version we fell in love with back in April of this year.

If you have a PC capable of running it, we strongly recommend you jump into Ion Lands’ adventure on that platform as what awaits you there is a wonderfully evocative slice of cyberpunk fantasy that, through the strength of its intricately crafted setting, draws you thoroughly into its tale. On Switch, as things stand right now and without some serious patching down the line, this is one of the most disappointing ports we’ve come across in quite some time.

Cloudpunk on Switch is a hugely disappointing port that struggles technically and ultimately fails to deliver the game in a satisfactory manner on Nintendo’s hybrid platform. Merge Games have made drastic cuts all over, with a massively reduced draw-distance sucking much of the life out of Nivalis, volumetric effects missing entirely, pixellation rampant and a framerate that still chugs along in the face of all of these concessions. If you’ve got a PC capable of playing this one we’d highly recommend you play on that platform as this is an adventure that’s well worth experiencing in its original form. This particular version, however, should probably be avoided.