In Assassin’s Creed Valhalla you’ll be in charge of building a Settlement (with a capital S) called Ravensthorpe for your comrades, which’ll act as a base of operations and somewhere to relax post axe throw. When you first invade England you’ll start small with a few folks in tents, but as you progress and invest in its development, it’s meant to expand into a thriving community offering many benefits.

I recently got hands on with Valhalla and I was able to see for myself what the Settlement actually had to offer. Although I’d should mention that I was dumped at least a few hours into the story, so I’m not absolutely certain what buildings you’ll start off with. Either way, I had a good mosey about all the buildings, got a fresh trim, some new tats, and had a feast with my Viking buds. All in all, I reckon I got stuck in enough to give you the lowdown. And you know what? It’s alright.

Unfortunately, there is admin involved up top. When is there not? To construct and upgrade stuff in your Settlement, you’ll need to get hold of two currencies: supplies and raw materials (eggs? Crude oil?). You’ll get varying amounts of these things by going on raids with your Viking crew and pillaging quaint English villages scattered across the map. I wish this was all I needed to build myself a home in real life. I suppose I could try doing a raid on my local Tesco, but that’d probably illegal.

Instead, imagine me as that spiky haired fellow from Homes Under The Hammer (a deeply important show ingrained in British culture) leading you on a whistle-stop tour of Ravensthorpe. I am wearing straight jeans, a very long parka, and a V-neck jumper with no undershirt.

First up, the grand longhouse. Every Viking needs one of these as their Settlement centrepiece. You can throw a lavish feast for your clanmates here, which’ll grant you temporary buffs that can get even fancier if you build a bakery, a brewery, or a cattle farm, among other things to provide things to actually eat and drink at a feast.

From what I gathered, you can’t actually get involved with any of this stuff. It’s purely stat boosting, with unblinking vendors who repeat one animation until you interact with them. I’d bought a grain farm and was hoping to do what grain farmers do, which is, er, rotate the grindstone or till the soil. But nope, no chill minigames to take my mind of my life of rage and bloodshed. The building pops up and that’s your lot!

You can access your personal quarters in the longhouse, though. I read some riveting mail from someone (can’t remember a word) and slept in my bed which skipped time and restored all my health. Nearby there’s a small space tucked away behind the throne room, where you make tactical decisions to either take over or ally with different territories across England. Essentially, you pick a point on the map and it’ll focus your story quests on that particular region and its ruler. Once you’ve finished an arc, you pick another point on the map and the cycle continues.

I liked the idea you could guide your narrative, I just can’t tell how much of an impact it’ll actually have on my Settlement. Will I be able to prop the heads of the kings I’ve slain on my bedside cabinet? Or will my bakery start selling Hovis 50/50 once I’m halfway through the game? Probably not, which is a shame.

Anyway, we move on. Onto the good stuff that we actually care about: dolling yourself up for a day out overthrowing kings, followed by a night out on the cobbles. The tattoo and barber shop will get the job done – I inked Eivor with all sorts of body tats and gave her a swanky new hairdo. There’s a large array of designs that can be bought from merchants, received as rewards, or found out in the wild. I know it’s only cosmetics, but this may very well be the most impactful part of your Settlement. You really can make Eivor your own – even if all my sick tats are covered up by armour 90% of the time [clamps fist in mouth and bites down]. 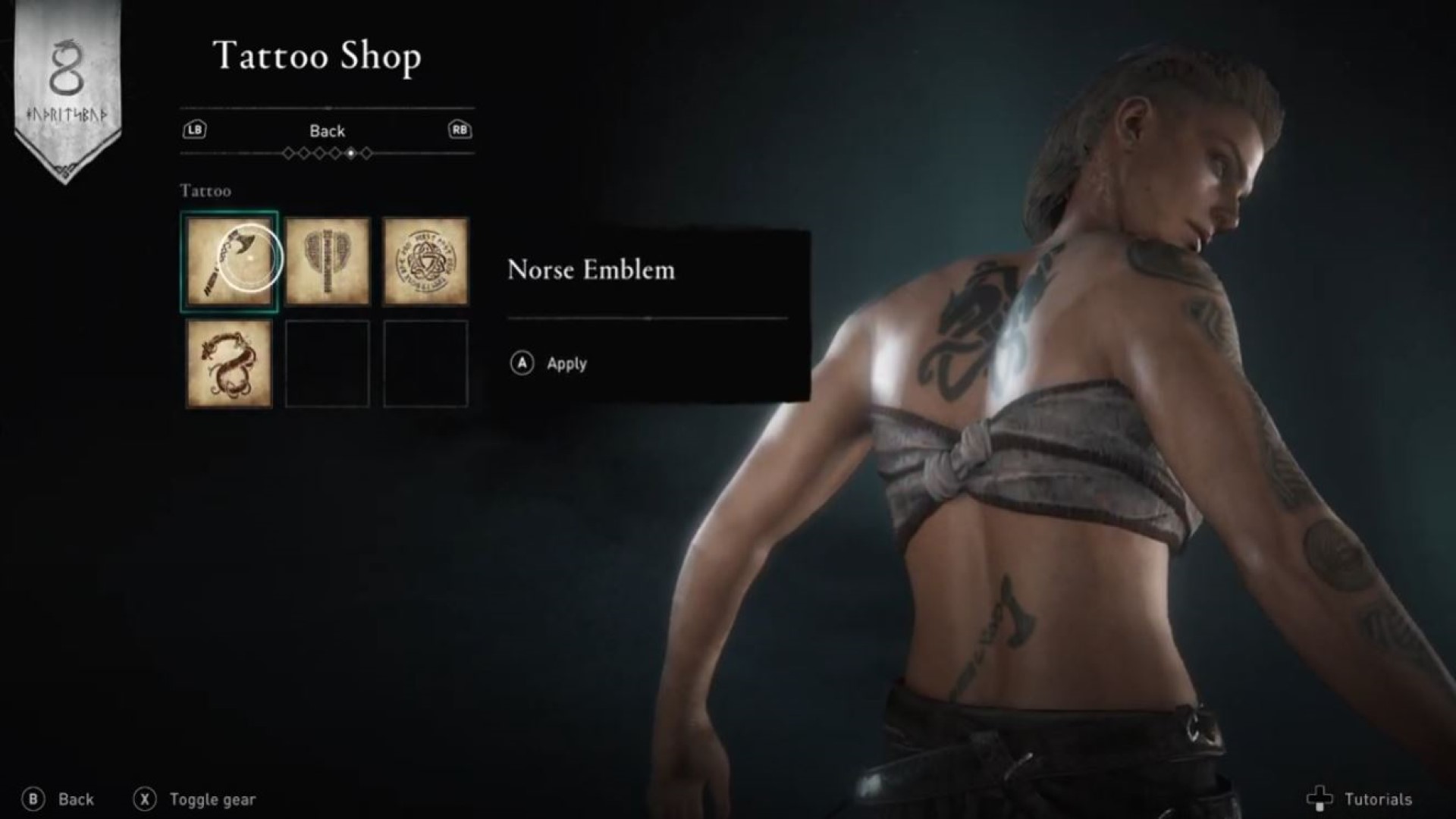 Yes, Gunnar the blacksmith is someone you’ll spend a great deal of time with. Give him Ingots and he’ll hammer your armour and weapons into rarer, stronger versions of themselves. It’ll also give them a bit of a visual upgrade, like cool patterns or spikes, which is a neat touch. Doing God’s work over there Gunnar, keep it up yeah.

For budding treasure hunters, the cartographer is worth building early if you can afford it. He lets you access special maps which’ll plop golden markers on the map for you to hunt down. Rewards can range from super valuable ingots (for your sweet spiky armour) to legendary bits of gear. Considering my want for more map markers, this felt like a real nice bonus (and would definitely add value to your settlement on the rental market). 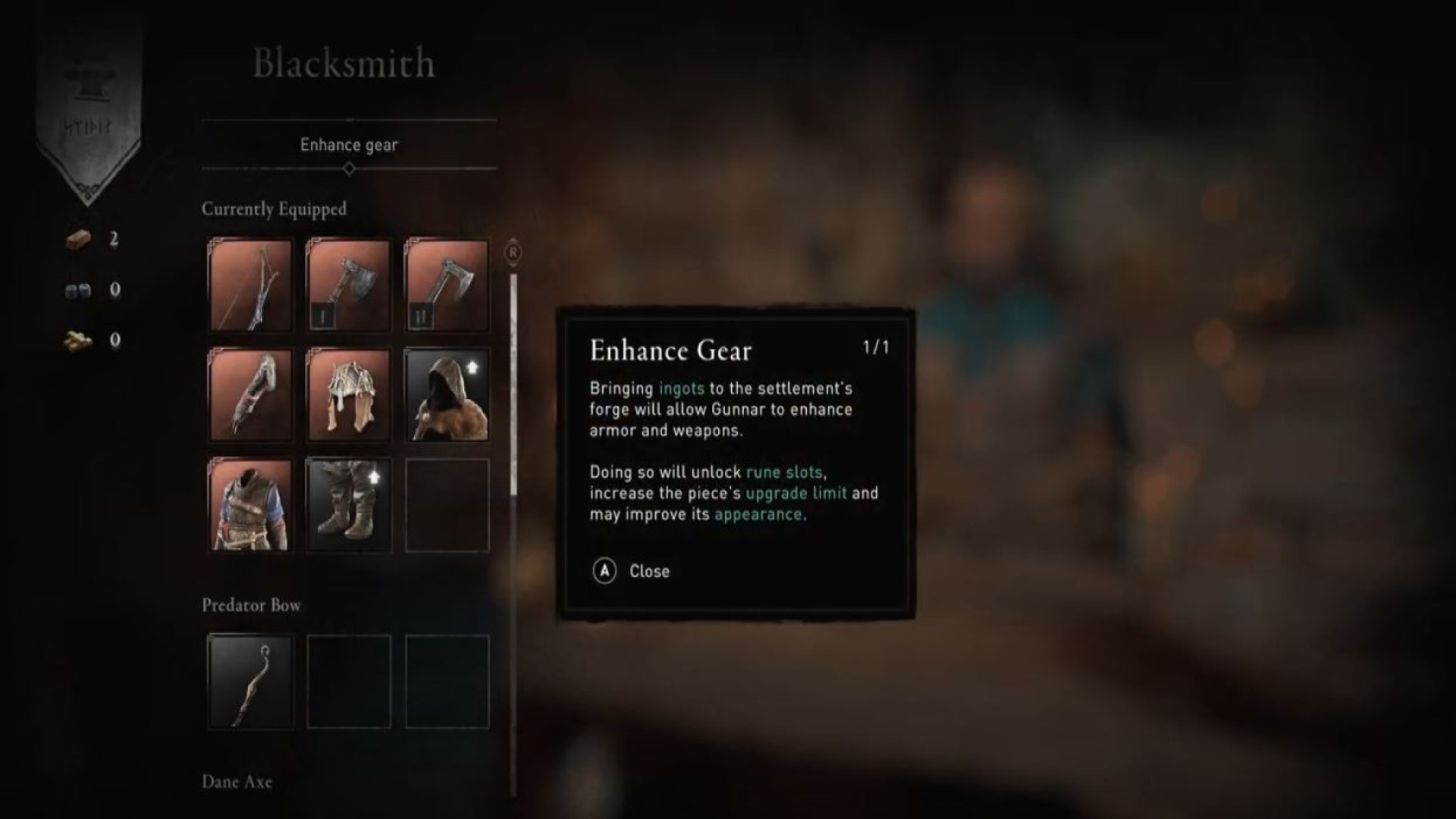 Now let’s sidle over to the barracks, which is where you can customise your personal Jomsviking. It’s basically a character creator for your raid crew, where you can tinker with all aspects of their appearance, give them different armour sets, and change their weapon loadout. The best bit is the fun names you get if you randomly generate them. I settled on a beefy boy named Gnupa Greed-Heart who looked like he could snap me in half with his pinky finger. Really I should’ve gone for Lafsi Milk-Drinker, and I regret not doing so. Sorry pal. I’ll never know how much milk you guzzled, or why, as I sent you back into the swirling dark of the random generator.

I’ve included a picture of him down below so we can all remember him. Please everyone, raise your glass of Oatly to Lafsi. 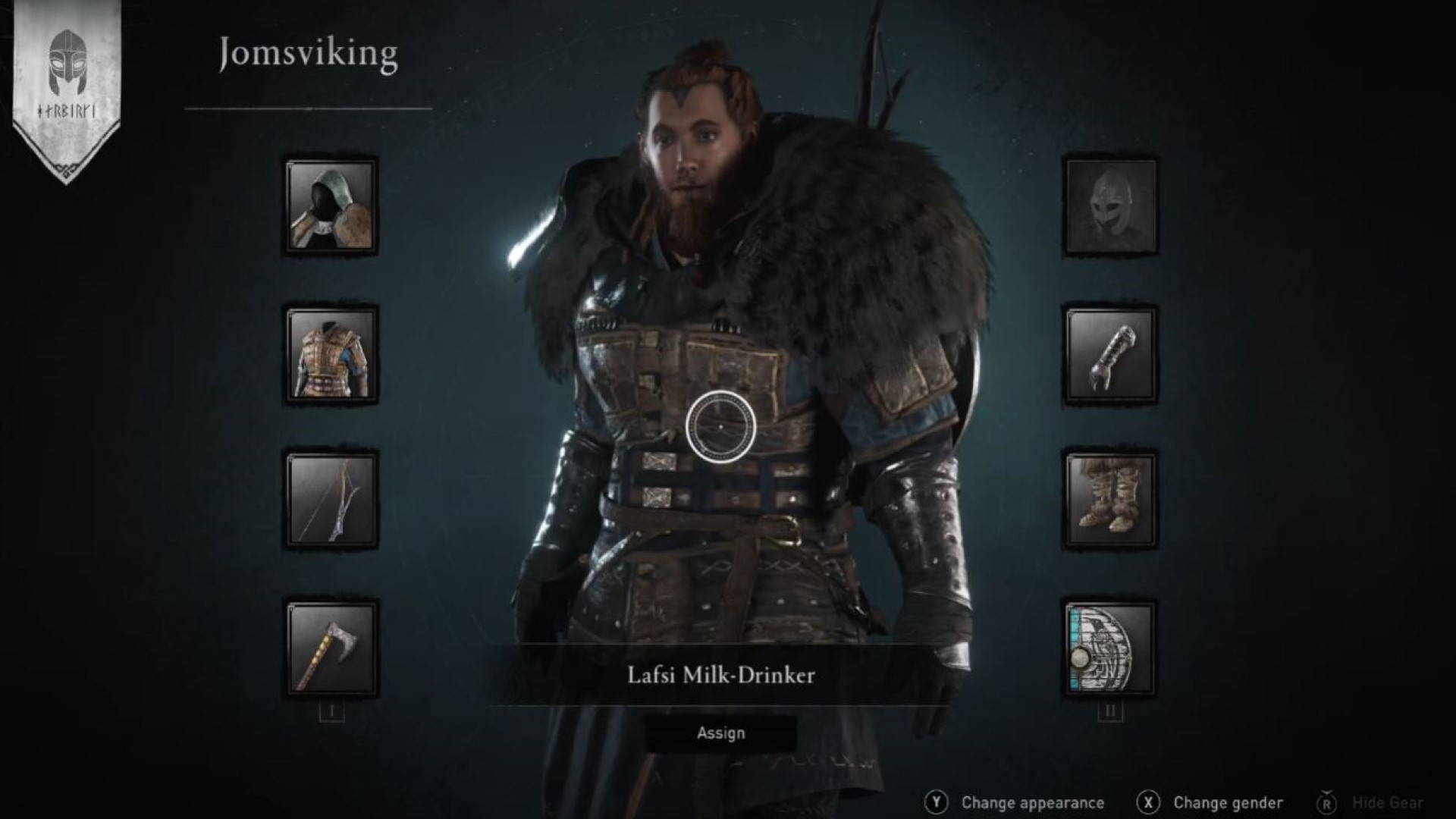 Sure enough, the shipyard is where you can customise and upgrade your longboat. There’s also a stable, where you can purchase different horses, and, perhaps less expected, an aviary where you can get new ravens. The utility of this part of the settlement can be best summed up with a shrug. The best part was the raven customisation. I could give my raven white dashes on its wings. Steady on.

In contrast, the fishing hut and hunter’s hut seem like places I’d definitely frequent. Unlock the former and you’ll be able to fish across the map and bring back your prized catches for unique rewards. I’m an absolute sucker for fishing in videogames and am of the firm belief that it’s a privilege to play a game with fishing in it. I have no clue what it’s like in Valhalla, but as long as the fish you catch are oddly detailed (we’re talking weight, length, girth, scales) and there’s a large compendium of all the mad stuff you’ve caught, then it’s a big thumbs up from me.

Construct the latter and you’ll be able to return specific animal parts for rewards, or go on hunts for legendary animals. I imagine you’ll fight against some freakishly large mega-animals like in Odyssey, nab their pelts and feel sort of bad about it all when you’ve cashed in a magnificent beast for a tawdry breastplate. I remember felling the Kalydonian Boar in Odyssey and feeling this surge of jubilation rush through me, before I thought about how it was just going about its daily life, eating grass and raising boar-pups.

Some bits I didn’t have the time or resources to properly explore. This the stuff I’m most excited about, unfortunately.

This includes the Hidden Ones Bureau, which feels like a reworked version of the mercenaries in Odyssey. Build this and you’ll be able to take on assassination missions to eliminate the Order of the Ancients. Honestly, I’m unsure what they’re beefing about, but it must be quite bad. I’m pretty sure I encountered a member of the Order when I was exploring a location called Venonis. He was a scary knight who was roughly 70 levels higher than me and had a special icon on the map when I spotted him. I challenged him to some of the old rough and tumble, but he was having none of it and felled me with his claymore pretty quickly.

It was unclear how my settlement would be impacted by me running about England and slitting throats for the Hidden Ones. If I manage to slay this bastard knight at some point, do I get something nice to show off? Odyssey’s whole schtick with the mercenary system was being able to collect powerful armour sets, but I’d hope Valhalla would give us these as a baseline reward, possibly on top of some new things for the Bureau building. Like automatic blinds. They’re all the rage.

The Seer’s Hut is a spooky place where Velka the Seer resides. I don’t know much, but it seems like in exchange for materials she’ll have you sip some funky juice which’ll transport you to mythological locations like Asgard. Expect some fantastical encounters in these locations. In the latest trailer (which you can watch above), there’s this massive, evil looking goose you’ll blatantly have to fight. 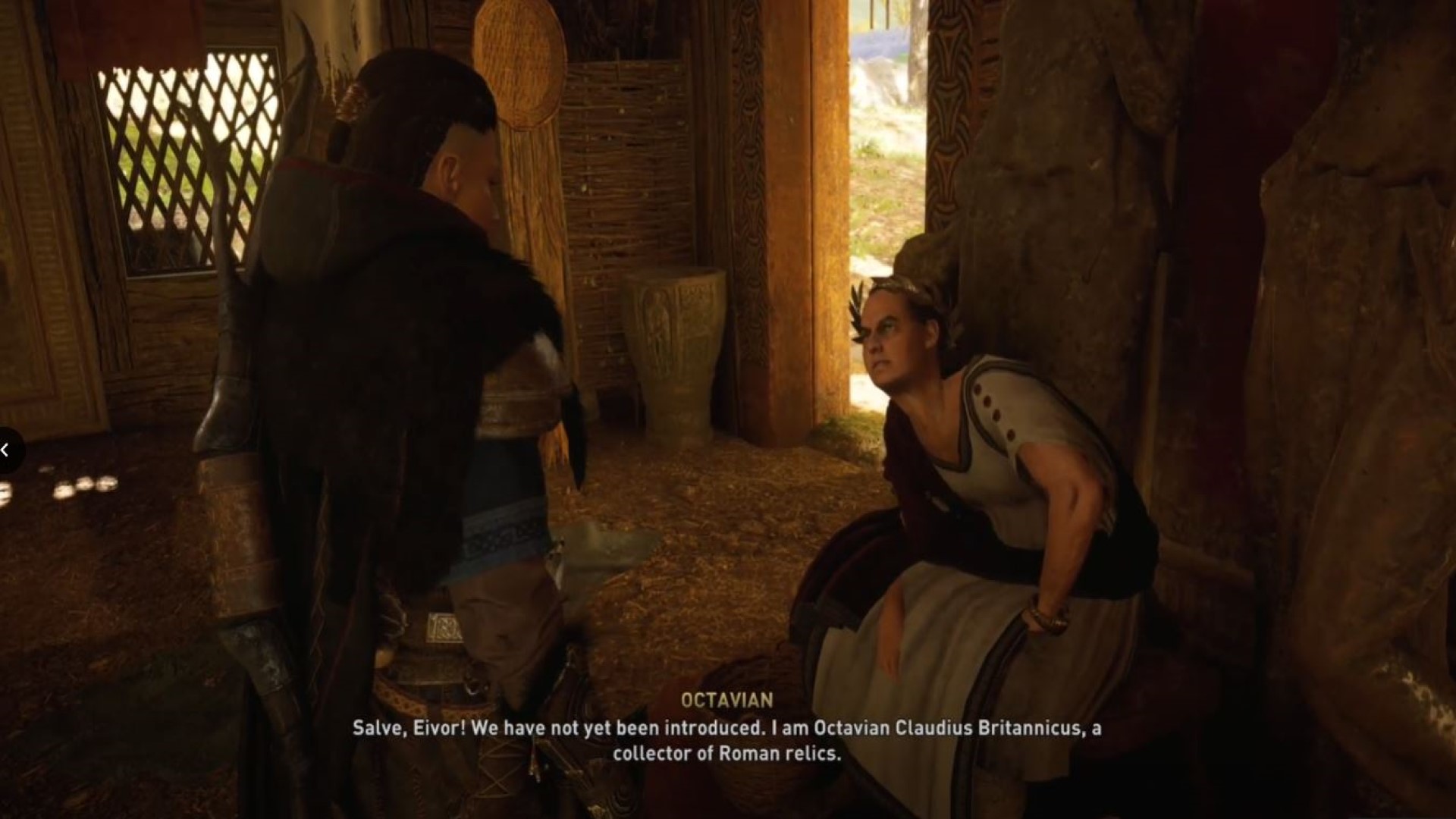 As a final stop on my settlement tour, let us visit Octavian’s Museum. He’s an eccentric fellow and fan of the old Roman Empire who collects Roman artefacts hidden across England. Hand those you find over to him and he’ll unlock some sweet decorations for your settlement, like statues you can dot about, or maybe even proper ruins later down the line.

I was left mouthing “s’alright” by Ravensthorpe and the customisation options it had to offer. I liked that the stuff I’d collect when going about my Viking business would feed back into my Settlement. There’s this extra sense of reward as you explore and plunder.

Although it’s a bit of a shame most of the stuff you can build only serve as stat boosters. And I couldn’t shake the feeling that my Viking community felt a bit lifeless. Perhaps this will change, but there weren’t many folks out and about, sweeping decking, or walking into walls like NPCs do. This only served to accentuate the way I saw everyone in Ravensthorpe as a machine tied to a post. As if moving would cause them to unplug from the mainframe and explode. I reckon in the full game I’ll pop in occasionally to hand over five fish to my faithful robots, maybe treat myself to a feast (skip the cutscene), then fast travel out.