AMD have officially unveiled their next generation of Ryzen 5000 CPUs and their new Zen 3 core architecture. Launching worldwide on November 5th 2020, AMD’s new Ryzen 5000 CPUs will be headlined by the 12-core Ryzen 5 5900X, which promises up to 26% faster gaming performance compared to AMD’s previous flagship CPU, the Ryzen 9 3900XT, and record-breaking single core performance that beats Intel’s Core i9-10900K. Here’s everything you need to know from tonight’s Zen 3 event, including how much the Ryzen 9 5900X, Ryzen 7 5800X and Ryzen 5 5600X are going to cost, and their individual specs.

You can see the price and specs of each Ryzen 5000 CPU in the table below. All three CPUs will be released on the same day on November 5th, and they’ll be compatible with all of AMD’s existing 500-series motherboards such as the X570 and B550.

There will also be a super high-end 16-core, 32-thread Ryzen 9 5950X processor available on the same day for enthusiasts for a whopping $799, but it was the $549 Ryzen 5 5900X that AMD spent most of their time talking about today, calling it “a beast in performance” during their presentation.

These performance increases are largely down to AMD’s new Zen 3 core architecture. They’re still based on AMD’s 7nm manufacturing process like their existing Ryzen 3000 series, but thanks to a redesigned core layout and new cache topology, Zen 3 allows the Ryzen 9 5900X to deliver up to 26% faster gaming performance compared AMD’s previous flagship CPU, the Ryzen 9 3900XT.

Zen 3 will also result in a 19% generation on generation increase in IPC (or instructions per clock), too, which is the largest jump AMD have made in this area since the introduction of their original Zen architecture in 2017.

Zen 3 also brings new improvements to power efficiency, with AMD claiming that these Ryzen 5000 CPUs will be up to 24% more power efficient compared their previous generation, which already had some of the best performance per watt figures in the biz. Indeed, to really drive the point home, AMD said that the Ryzen 9 5900X will deliver up to 2.8x more performance per watt than Intel’s flagship Core i9-10900K.

It’s not just power efficiency where the Ryzen 9 5900X hopes to take the lead over Intel, either, as AMD also showed off some gaming benchmarks that put the 5900X ahead of the Core i9-10900K in several big titles. 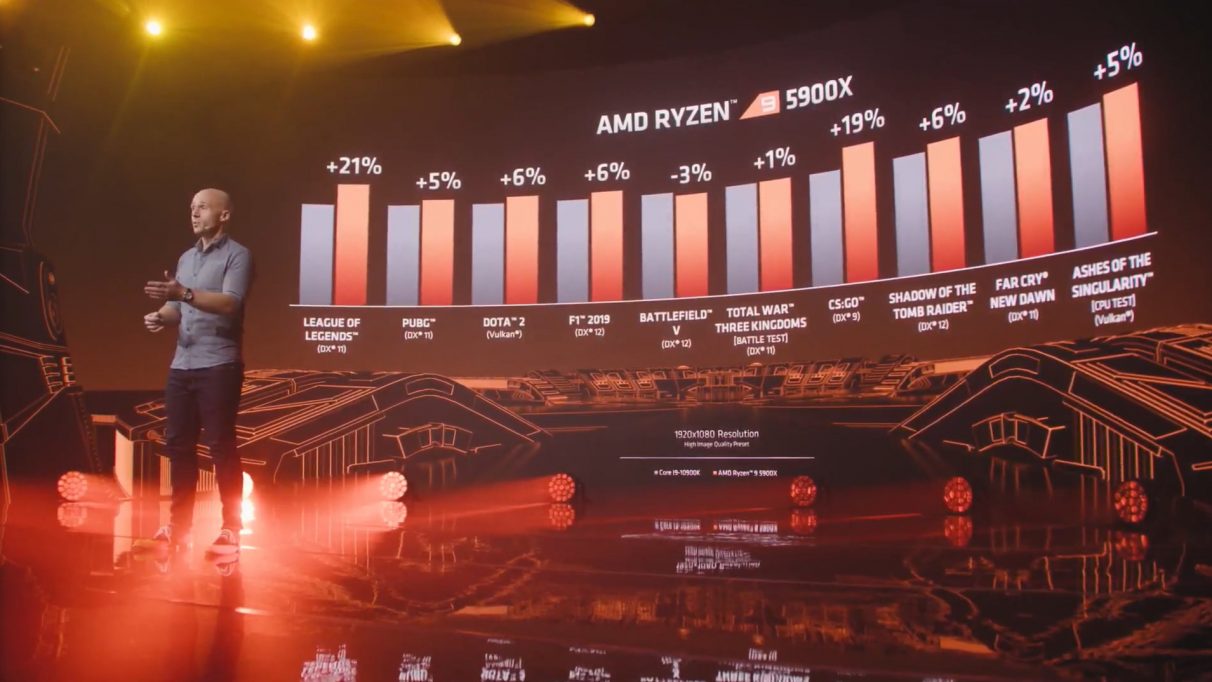 AMD’s benchmark figures for the Ryzen 9 5900X’s gaming performance puts it ahead of the Intel Core i9-10900K in several titles.

As you can see above, AMD’s benchmark figures for the Ryzen 9 5900X’s gaming performance show gains of up to 21% over Intel’s Core i9-10900K at 1920×1080 on High graphics quality, although there are still a handful of games where both chips are neck and neck. Intel maintains their lead in Battlefield V, for example, and is only a single per cent behind the 5900X in Total War: Three Kingdoms, and 2% slower in Far Cry New Dawn.

Still, AMD claim that, on average, the 5900X is 7% faster in 1080p gaming compared to their Intel Comet Lake competition, and up to 26% faster than their previous generation of AMD chips. 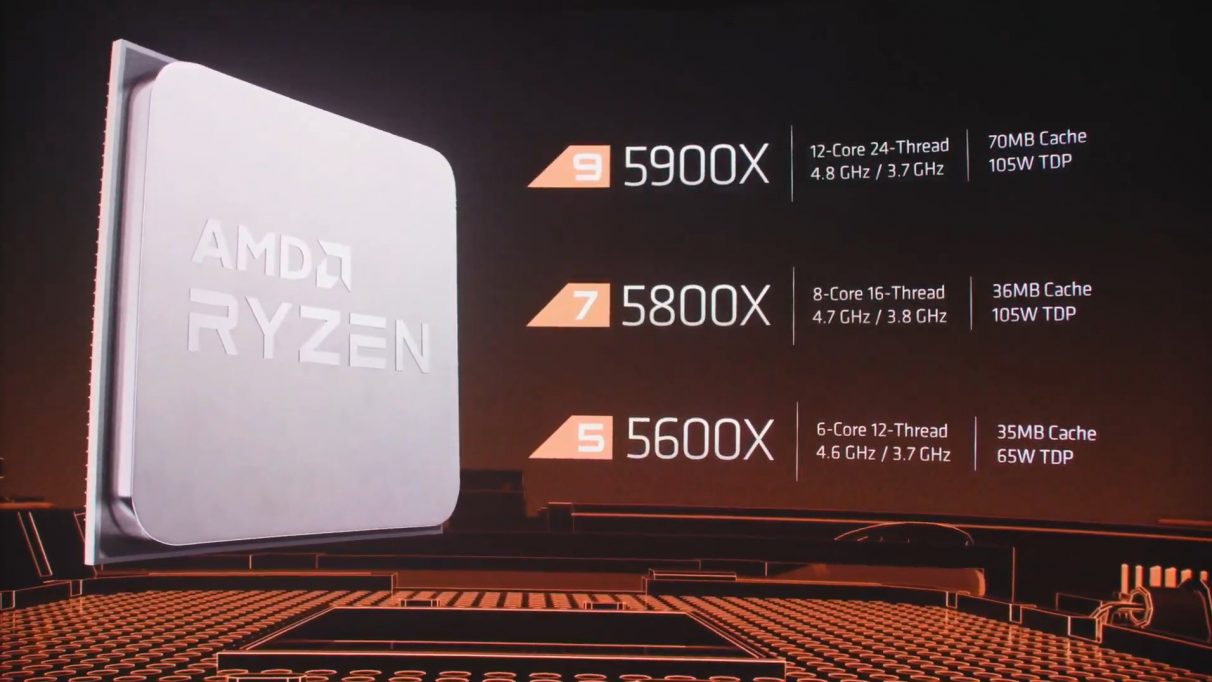 The most surprising and perhaps most troubling thing about AMD’s new Ryzen 5000 CPUs, though, is the price. Historically, AMD have always managed to come in quite a bit under their Intel rivals, but I have to admit I did a small wince when I saw how much these ones cost. $299 is quite the jump from the Ryzen 5 3600X’s starting price of $249, for example, and it gets even bigger when you consider the Ryzen 5 3600’s launching price only came in at a mere $199.

Of course, I’ll have to wait and see how all three CPUs perform before we can start making more concrete assumptions about whether they’re going to be as good value as their Ryzen 3000 predecessors or not, but those prices do have me a bit worried all the same. Still, as an early glimpse of what to expect come November 5th, there’s certainly a lot to like here. Let’s just hope those performance gains end up justifying those concerning prices.