In the modern gaming industry, new game releases are largely put into one of two groups: Indies and AAA games. This, however, wasn’t always the case. Just a few generations ago, prior to indie games taking the spotlight, you had a lot of games that were often referred to as “AA” games. Such releases didn’t have the production value or budget to be discussed alongside the big-hitting household names, but neither were they limited productions made by a few relatively inexperienced developers. No Straight Roads, the debut release from Malaysian studio Metronomik, would squarely fit the definition of a AA game. It has the energy and ingenuity of a smaller scale release while also featuring some of the hallmarks of big-budget games, although this sometimes results in moments where it feels like No Straight Roads is biting off more than it can chew.

The story picks up with rock bandmates Mayday and Zuke trying out for the Lights Up Auditions, a televised music show not unlike American Idol. Despite their excellent performance, the judges of No Straight Roads – the label producing the show – tell them that the age of rock is over and that EDM is the new hotness. Mayday and Zuke don’t take the rejection well, of course, and their anger is only further stoked when a later power outage in Vinyl City shows that NSR is using its power and influence to further its own ends, rather than those of the people. Galvanized, Mayday and Zuke set out to start a musical revolution to unseat NSR and prove how rock music can change the world. 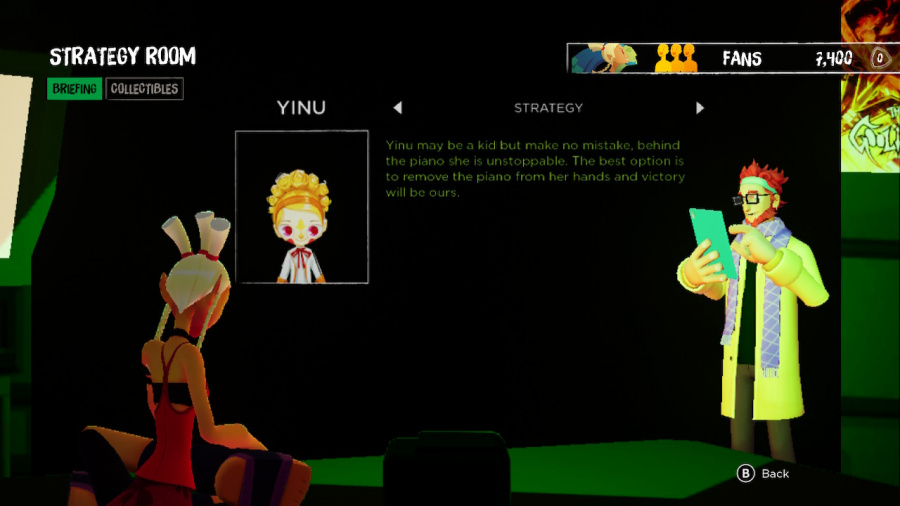 It’s a classical underdog story through and through, and No Straight Roads tells it with such earnestness and zeal that you can’t help but become enamoured with this strange musical world. Mayday’s extremely hyper personality contrasts well with Zuke’s cool and reserved demeanour, and it’s fascinating to see how the two interact with all the larger than life personalities on their quest which also offer up some light commentary on real-world musical acts. For example, one of the earliest bosses you face is a clear homage to Hatsune Miku and other such Vocaloid programs, and the band struggles to understand how she’s so popular when “she isn’t even real!” Though the writing can sometimes stray a little too far into campy, eye-rolling territory, there’s hardly a moment where you don’t see the heart and zeal that’s been put into this story; it’s abundantly clear how much love went into creating these characters and the world they live in.

In order to prove their relevance, Mayday and Zuke travel to various artists’ venues to hijack their concerts, which usually leads to an enormous phantasmagoria of colours, lights, and pounding music as the two groups battle each other for control of the venue. Gameplay could be most closely described as a Devil May Cry-style beat ‘em up, but with elements of rhythm games thrown in to keep things fresh. Enemies will often attack you to the beat, and though visual cues will also telegraph when the next attack is coming, you’re best served by getting into the rhythm and dodging when the music dictates. It’s all well and good in theory, then, but issues quickly arise when you begin to get into the weeds of how this gameplay setup is executed. 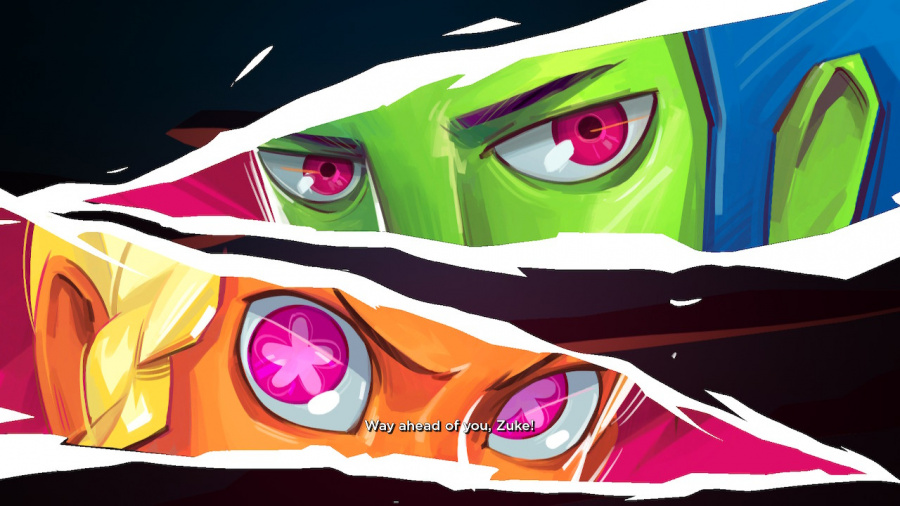 The first and most glaring flaw is the poorly-implemented camera, which is often just as much an enemy as the set-piece bosses you fight. In free roam sections, you’re given full control of the camera, but this control is ripped away when you need it most for the boss fights. Here, you’re instead treated to various fixed camera angles that make it difficult to judge depth as you dodge attacks, and this matter isn’t helped by the lack of an enemy lock-on feature to help land your blows. Sometimes bits and pieces of the environments can unintentionally obscure part of your view, too, making an already less than ideal camera set up even more frustrating. Most of the time it’s okay, the camera is never bad enough to make No Straight Roads unplayable, but there’s simply no excuse for such camera problems to crop up in a game released in modern times.

Further issues then arise as the repetition begins to set in. Prior to most boss battles, you’re first tasked with going through an ‘approach’ to the venue that adds next to nothing to the overall experience. These approaches consist of you enduring five or six extremely basic arena-style battles against a few robots, with some light platforming elements mixed in. Enemy and obstacle variety is exceedingly thin in these portions and the challenge is non-existent, making it feel more like mindless filler than a meaningful palette cleanser between the big fights. Moreover, these portions highlight the relative shallowness of the combat system. 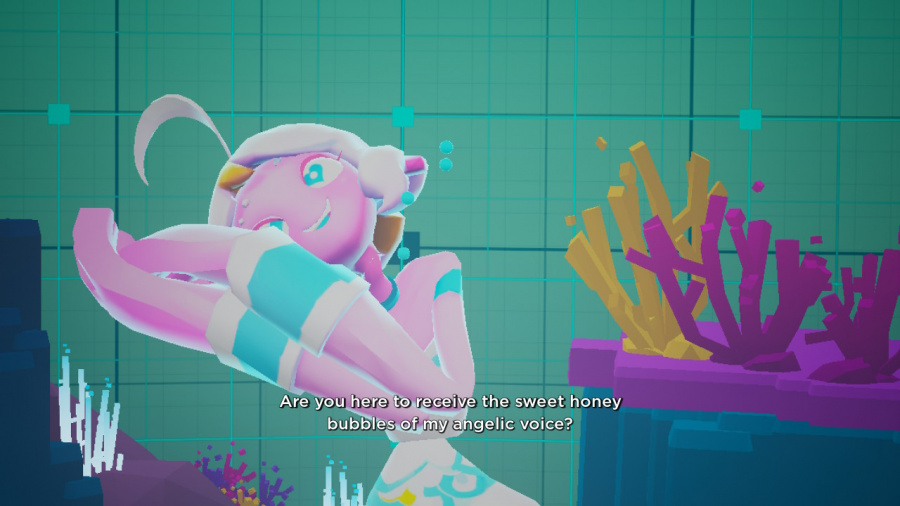 Mayday is the tank-like heavy-hitter of the duo while Zuke is the lighter and faster combo master, but there’s very little to differentiate the two’s playstyles aside from a handful of swappable special moves that you can bind to the shoulder buttons. Having only one primary attack button also limits the depth and breadth of the potential attack combos you can pull off, meaning you’re pretty much limited to spamming the ‘Y’ button while you watch the sparks fly. There’s a basic skill tree that you can fill out to gradually buff up the duo’s combat prowess over time, but this still doesn’t do much to switch up the rather dull moment to moment gameplay.

If you can get past those main issues with the camera and repetitive combat, however, you’ll find that the boss encounters are pouring over with creativity and zest. Dodging music notes as you scale a skyscraper-sized rose reaching for the moon and jumping out of the way of planets being thrown at you from an intergalactic DJ are just a few highlights from the memorable boss fights, each of which have several phases that get more ridiculous the further in you go. Indeed, the boss fights are good enough that we wish the developers had focused on making No Straight Roads a boss rush game exclusively, as all the other extraneous elements only serve to drag the overall experience down. 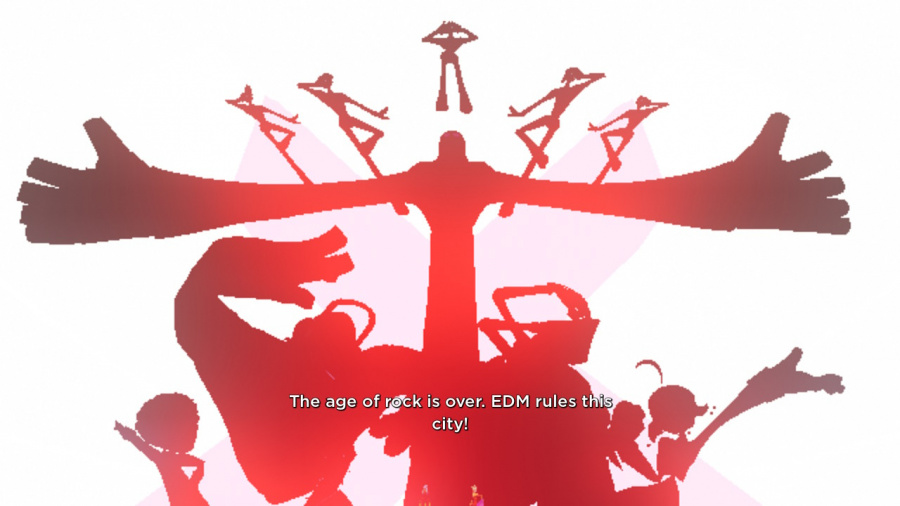 The abovementioned filler sections are one offender in this regard, but another notable letdown is Vinyl City itself. This free-roam section proves to somehow be simultaneously confusing and barren, basically serving as something for you to spend a few minutes running across to get to the next boss venue. There are power cells liberally scattered around the environment like coins, but these only serve the purpose of helping you restore power to things like street lights and vending machines, netting you a few extra fans to help you fill out the skill tree further. Otherwise, there are also stickers to be found which you can slap onto your instruments to give them minor stat buffs, but this again feels like a contrived justification for why the free-roam segment is there.

Vinyl City also serves as a harsh reminder of the issues that No Straight Roads has with performance, as pop-in and slowdown are particularly rampant in this portion. Once you get into the limited arenas of the boss venues, these problems lessen considerably, but there are still one too many times where massive portions of the background suddenly phase into existence or some dropped frames cause you to miss a dodge. Oddly enough, performance seems to be much better in portable mode, where the 60FPS target is mostly adhered to, but the tradeoff is overall fuzzier image quality. If you can ignore the performance issues, however, No Straight Roads features a colourful and delightfully weird art style that seems to take a lot of inspiration from Psychonauts, and it’s quick to lay on the charm. 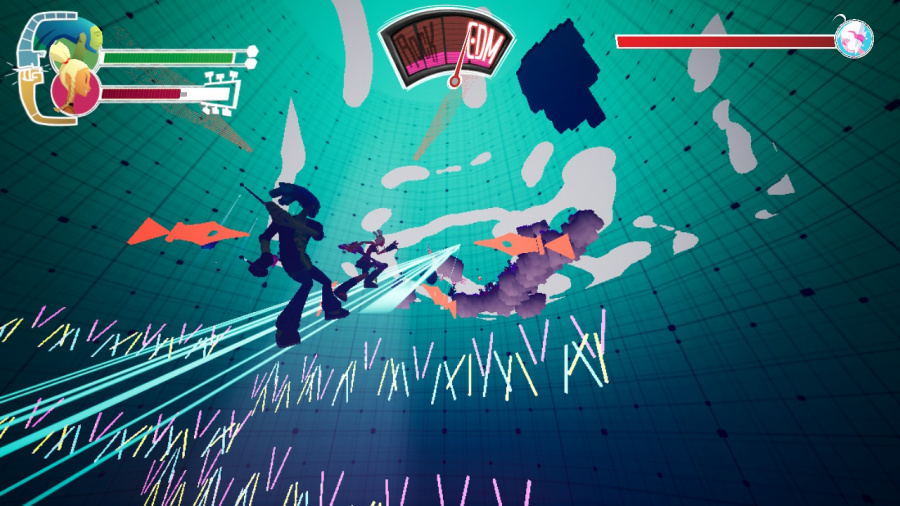 We’d be remiss to discuss such a musically-focused game without taking some time to focus on the soundtrack itself, which is simply excellent. Although there’s an odd lack of rock songs for a game about an aspiring rock band, the mostly EDM-centric soundtrack is wonderfully produced and consistently keeps the pace moving at a brisk pace. Metronomik clearly put a lot of care and attention into making each track thematically distinct for each boss while also adhering to the overall tempo of this often fast-paced release, and the presence of a few guest artists ensure that there’s plenty of depth and variety to the tracks on display.

No Straight Roads isn’t a bad game at all, but it’s one that consistently falls short of the tremendous potential that it often hints at. The world, characters, music, and overall idea of its gameplay are ripe for a groundbreaking beat ‘em up game, but this, unfortunately, is just a so-so one. Performance problems, camera issues, and repetitive gameplay are all factors that hold this one back from greatness, but these issues are often balanced out by the spectacular boss fights, excellent soundtrack, and charming writing. We’d recommend this one to beat ‘em up fans looking for an interesting new entry in the genre, but with the big caveat that you consider this release’s flaws before taking the plunge. It’s certainly a worthwhile experience, but one that will likely disappoint if you come into it with the wrong expectations.