Fight Crab, the game about fighting crabs, was inspired by Dark Souls

Masafumi Onuki, the programmer behind Japanese indie studio Calappa Games (a.k.a Nussoft), is a man who knows what he likes. He likes crabs. All three of his games to date have gone in heavy on crustaceans: there was Neo Aquarium with its intense sci-fi crab brawling, then party-based third person fighting game Ace Of Seafood (which admittedly also featured fish), and then this year’s Fight Crab, which is a visual novel about music theory. Only joking, it’s a game where crabs beat the stuffing out of each other.

I had mixed feelings about Fight Crab, in that I thought the concept was both brilliant and perfectly executed, but also that it was a complete nightmare to play, giving me motion sickness to the point where I barked oats onto a tree. I wouldn’t want to change anything about it, but it’s still not something I’d actually like to play a whole bunch. Still, if there’s one thing my opinions are unambiguous on, it’s crabs. And since I could sense a fellow aficionado in Onuki-san, I figured I’d get in touch with him for a chat about the old snipple-snapple. I’m glad I did; it was one of the most pleasant interviews I’ve ever conducted. Here it is.

Nate: What do you think is the most interesting crab, and why? My favourite is the coconut crab.

Crabs are interesting in general, but I must say the Calappa is my favourite. The way its claws fit together perfectly is really cool and the claws themselves are a funny shape, like can openers. Also, I think its round shape makes it look kinda cute. Did you know coconut crabs don’t really eat that much coconut, contrary to popular belief?

The Calappa model from Fight Crab.

N: What is your favourite crab to eat, and what is the best way of preparing it?

Most crabs are delicious after just boiling them, but using Blue King Crab to make crab fried rice is my favorite crab recipe. They have a strong flavor and relatively high fat content, so the resulting fried rice has an extremely rich, meaty flavor.

N: What is it about crabs in general that interests you? I am very interested in crabs myself, and I can recognize a fellow enthusiast in you.

I guess the most appealing thing about them would be their pincers. Although far different from human hands, I find the way they use their pincers to handle food and grab things hints at some kind of intelligence. I wonder, if crabs had evolved a higher level of intelligence similar to that of dogs and cats, would they be good companions? Although they move in what some might consider a humorous way, if you look closely they are pretty cool looking and their joints remind me of robots. I mean they have what is essentially natural armor with spikes and claws, what’s not cool about that?

“I wonder, if crabs had evolved a higher level of intelligence similar to that of dogs and cats, would they be good companions?”

N: When I visited Japan, I was fascinated by the importance of sea creatures in visual culture and folklore. What do you think is the cultural significance of crabs in particular?

In Japan, there is a huge market for three types of crabs in particular: the Snow Crab, the Horsehair Crab, and the Red King Crab. As an island nation, Japan has a long history of having seafood as a major protein source, and there are numerous fishing harbours across the country. Even for the above types of crabs, you can find “brands” which denote where they were caught, etc. Crabs are seen as something special to be eaten when celebrating something, or when staying at a fancy hotel, and there are even crab tours. I was actually pleasantly surprised too when I visited San Francisco, where I saw paintings and wall ornaments of the Dungeness Crab. 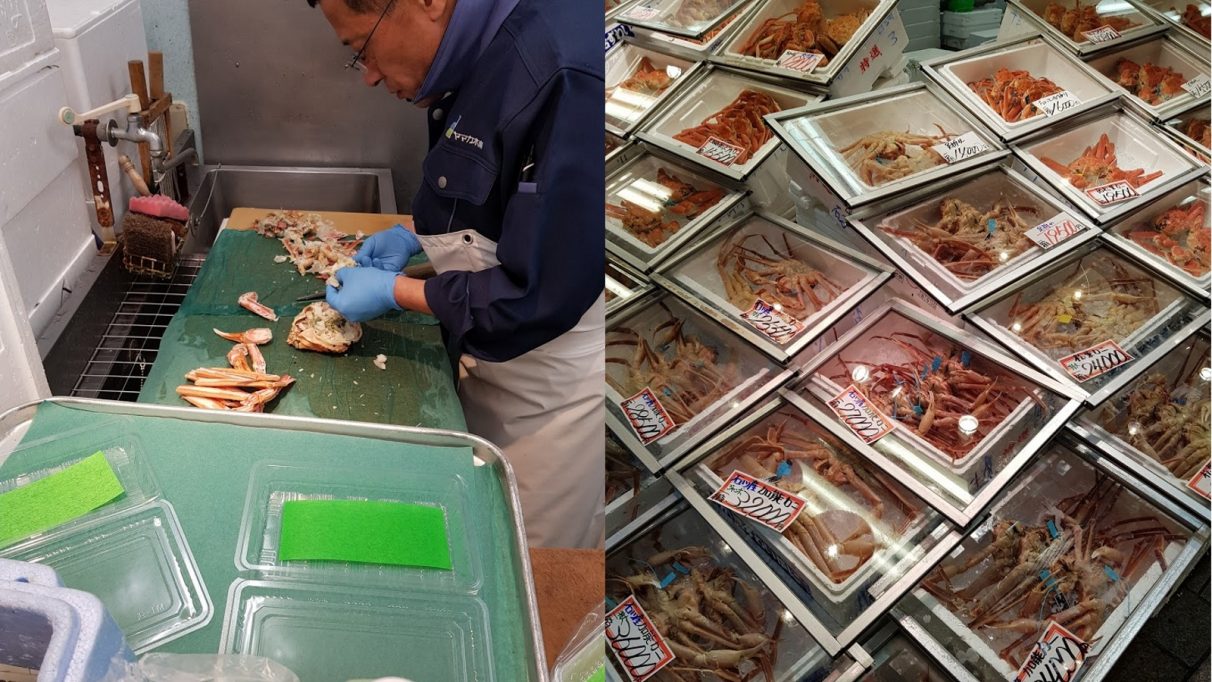 Some of my crab photos from Omicho market in Kanazawa.

N: Do you have a favorite aquarium?

The “shrimp and crab aquarium” in Wakayama, Japan. It specialises in crustaceans, as you can probably tell from the name.

N: I like giant isopods a lot; have they appeared in any of your games?

A moderate-sized large isopod has been featured in Neo Aquarium as an NPC actually. However, as for the largest species, Bathynomus Giganteus, although I have definitely considered featuring it in my games, I have a hard time thinking of how to balance it as a character. They are super big and bulky which I imagine would make them extremely defence-based, and they don’t really have large claws to attack with. They are on my radar though, as they are extremely interesting.

N: Fight Crab’s control scheme is… not easy to master. What inspired it?

Robot anime was my inspiration for the control scheme, where both arms are controlled separately with the sticks. Although the idea itself I believe is something that many developers have thought of, it is as you say not an easy control scheme to master, and therefore has not really been implemented in games thus far. I have only ever seen it in Gigantic Drive. Back in the PS1/2 days, a lot of games had unique control schemes, where players had to read manuals to understand them. But these days I guess the mainstream trend is to use standard control schemes and avoid challenging ones. Personally, I feel that if you want to make a truly unique game, then the control scheme itself is also an area where you can apply a personal touch.

“There are some nuanced parts of the game where I imagine translating my sense of humour was challenging.”

N: The humour in Fight Crab is fantastic, as it’s presented in such a matter of fact, deadpan way. How did you approach this element of the design?

I guess I am pretty deadpan in general, and this combined with the ridiculous nature of the contents, resulted in the humour found in Fight Crab. I must give credit to the localisation team though, as there are some nuanced parts of the game where I imagine translating my sense of humour was challenging.

In regards to Fight Crab, FromSoftware’s Dark Souls and Armored Core inspired the aspect where you can hold different weapons in each hand, while Sekiro: Shadows Die Twice inspired the visual and sound effects when clashing weapons together, and also the posture mechanic. The physics-based aspect was inspired by Gang Beasts, and the feeling that you are remotely controlling the crab was inspired by the Remote Controller Dandy series. And, of course, the damage percentage mechanic is heavily inspired by the Smash Bros. series. Neo Aquarium was inspired by the Cyber Troopers Virtual-On series, and Phantasmagoria Of Flower View. 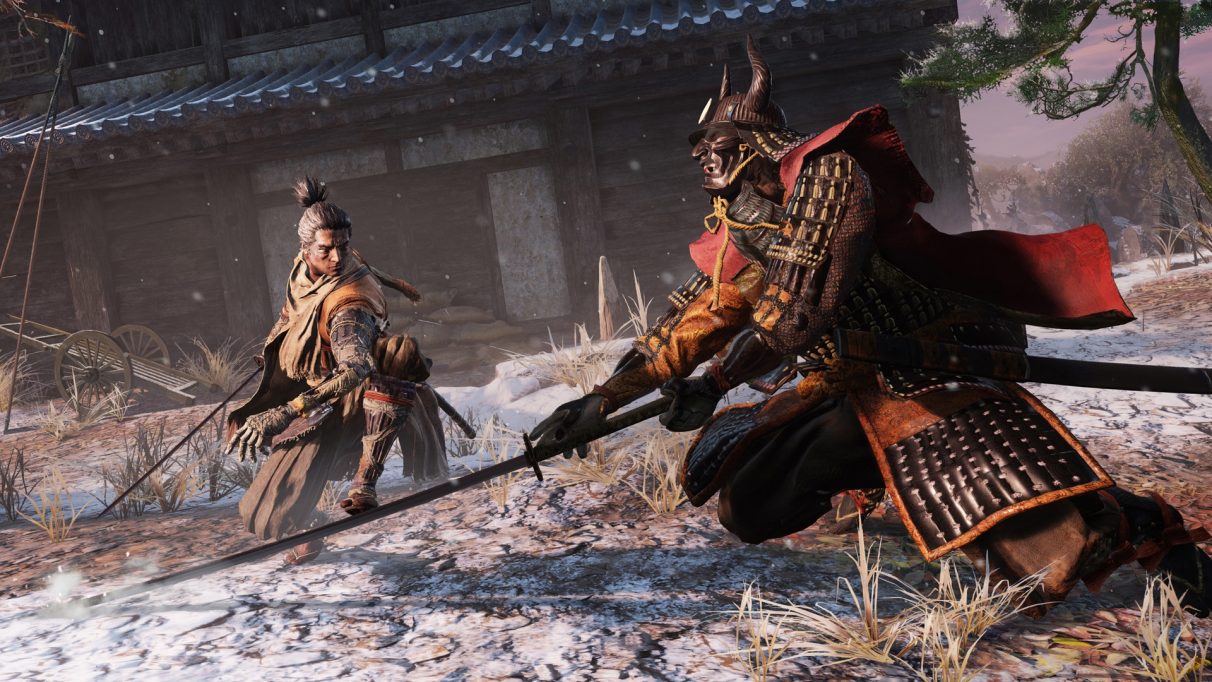 Imagine this, but with crabs

N: If you had an unlimited budget, and as many staff as you wanted to make the ultimate crab game, what would it be like?

First off, I would bring in a marine biologist as a consultant. The weapons would be designed from the ground up for crab-specific usage, and the levels would be designed to reflect the perfect environments for crabs to live. I guess it would be more of an exercise in realising an advanced race of crabs, the tools they would use, and the places they would live. However, I feel this would be more for myself than anyone else, and wonder if people would enjoy playing something like this.

And there you have it. Following that chat, I think Onuki-san might be one of my favourite people making games today. The only place where I disagree with him entirely is in his final answer, as that sounds like a game I would move heaven and earth to play. Even if it made me sick.